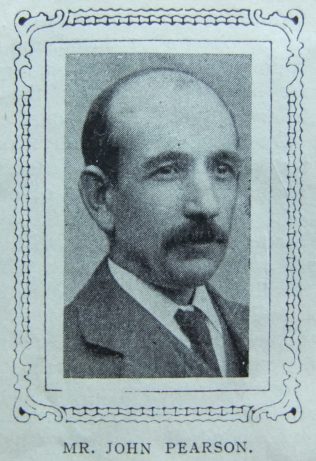 MR. JOHN PEARSON, of Stoneferry, in the Hull III Circuit, has a worthy record of long and faithful service.

Converted at the age of fifteen he heartily dedicated his life to the service of Christ. He became a teacher in the Sunday school, where his worth was soon recognised, and in a short time he was made the superintendent, a position which he held for close upon twenty years. He has been the Society steward of our Stoneferry Church for twenty-five years, the duties of which he has discharged with credit to himself and to the satisfaction of the church. He is an ardent endeavourer. Retaining a youthfulness of spirit he is popular with the young people. He can always be relied upon to be at his post to cheer the preachers by his presence and support.

The Circuit has naturally recognised his worth and two years ago he was elected as Delegate to the District Meeting. His brethren at the District Meeting also showed their esteem by electing him as Delegate to the Conference. He is just now in the prime of life and his service is given ungrudgingly for his church. Nothing gives him greater joy than to see his church prosper. His geniality and loyalty have won for him a large circle of friends. Within the last twelve months Mr. Pearson has had the joy of seeing the church debt wiped off, and also the forming of a Young People’s Institute. In the accomplishing of this, his fertile mind has been at work. In the carrying out of suggestions he does not spare himself. His family is also with him in every good work.

His friends devoutly pray that for many years he may be spared to give of his best to the church he loves.

The subject of this sketch was probably John Pearson born abt 1864 at Newland, Hull, Yorkshire, to parents John and Mary.

I have not been able to unambiguously identify the date of John’s death.