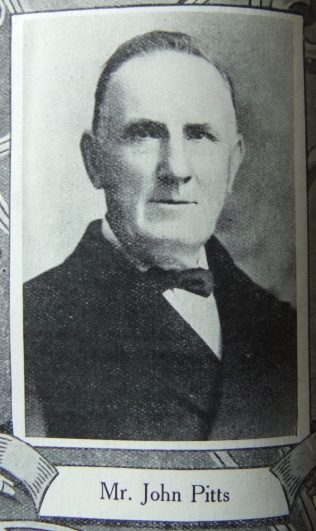 The Bradford VII. Circuit delights to honour the name of John Pitts, its veteran Circuit Steward. Born in 1838, converted in 1864, he has been a member of the P.M. Church for 45 years. At the July Camp Meeting the writer heard him announce that was the 62nd. Annual Camp Meeting he had attended in that very field. Though only recently elected (March 1907) to the Circuit Stewardship, he has long records of service in other departments: an able and acceptable local preacher for 43 years, Sunday School Superintendent for 36 years in succession, and class leader for 20 years. A beautiful upholstered oak arm chair, duly inscribed, bears witness to his long and valuable services in the Idle Sunday School. Twice he has served his Circuit as delegate to District Meeting. Though 71 years of age he is still in active service. May God long spare his life.

John was born on 12 March 1838 at Woodend, Woodhill, Yorkshire, to parents Richard and Sarah. Richard, a clothier, was trustee and Sunday school teacher in the Idle school.

When quite a child, John went to Idle, and began to work in a local mill at eight years of age, and continued until a few weeks before his death.

His obituary records that John was a great favourite at camp meetings, for he was a preacher of exceptional ability, possessing a fine voice and a statesman-like presence. His familiarity with the Bible was almost unique, and his preached sermons were clothed in Biblical language. He had a fine memory, and the aptness of his quotations of scripture was delightful to listen to.

John died on 26 January 1922 at his home in Eccleshill, Yorkshire.