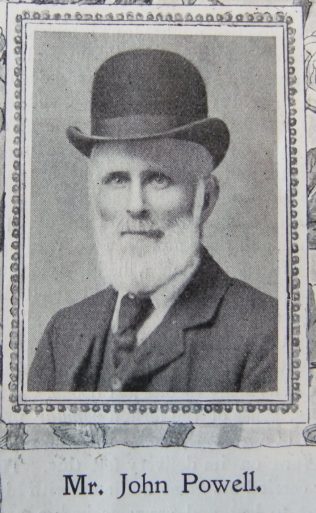 A primitive Methodist of the third generation, John Powell, of Shawbury, imbibed early and well the principles of our Church. Converted in 1880, he has since served Hadnall Circuit with unsurpassable loyalty and untiring zeal. Though no seeker of office, being a man of many parts, he is entrusted with manifold duties, which, whether humble or dignified, he discharges eminently satisfactorily. A local preacher for twenty-eight years, he has served our churches with fidelity unaffected by their humble proportions. He is a life-long abstainer, an ardent Temperance advocate, and non-smoker. His other offices include Society Steward, class-leader, organist, Sunday School Superintendent, Treasurer of the Centenary Fund, and for seven years he has exercised a wise and sympathetic Chancellorship. He has been delegate to District Meeting and Conference. In social affairs as Schools Manager, District Councillor, member of Parish Council from its foundation, and Board of Guardians, he is a man of sound principle and sterling worth.

John was born abt 1854 at Shawbury, Shropshire, to parents John and Hannah. John, senior, was a wheelwright, and provided the land on which the Hadnall Chapel was built.

John worked as a blacksmith. By the time of the 1911 census he was described as a general engineer.

John married Jane Crowther (b1849) in the spring of 1883 in the Atcham Registration District, Shropshire.