A Local Preacher in Derbyshire and Staffordshire 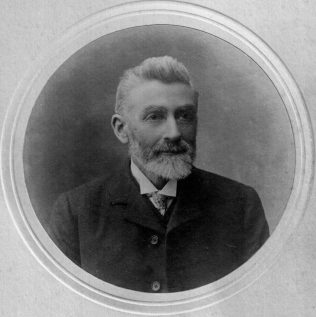 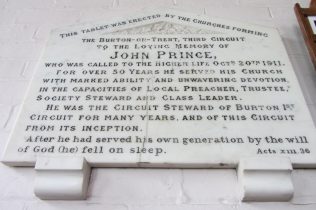 John Prince was born at Mincepie Hall, Rocester. When he was 8 years old, his family moved to Marston Park, a large farm in Marston Montgomery. He was converted at a young age to Primitive Methodism and became a Society Member at the age of 15. Around 1869 he moved from his parents’ home to farm on his own at Home Farm, Foston, where he remained until his death. He was an important cattle farmer and for some years ran his own dairy. In 1877 John Prince married Elizabeth Howson, a Primitive Methodist farmer’s daughter.

While still living at Marston Park, John Prince became a Local Preacher and was included in the Ramsor Circuit Plan of Local Preachers. In addition, on moving to Foston, he was listed in the Burton-upon-Trent Circuit Plan. On Sundays, after taking a morning class a couple of miles away, he would have an early lunch with his family and then ride off to preach at far-flung chapels in the afternoon and evening. His faithful horse could often be seen in the evening returning to Home Farm with John Prince asleep in the saddle! In June 1899 he appeared at Sudbury Petty Sessions, as earlier that month he had failed to attach a lighted lamp to his cart when he was returning home in the dark. He explained that “he had been conducting a service at Egginton and was a little later than he expected to be.” A fine of 1 shilling with 7 shillings costs was imposed – much less than a previous defendant had had to pay for a similar offence!

Over the years John Prince held many offices in the Burton-upon-Trent Circuits and he was a Circuit representative, acting as a delegate for the Nottingham District, at various Primitive Methodist conferences, including those at Scarborough in 1877, Burnley in 1896 and Tunstall in 1910. He also held the position of Vice Chairman at Nottingham District Synods. In secular life, apart from fulfilling agricultural commitments, he was a Parish Councillor and Vice President of the Uttoxeter Temperance Society.

Along with his brothers, Henry Prince of Eaton Dovedale and George Prince of Marston Park, John Prince was one of the original Trustees of Rocester Primitive Methodist Chapel which opened in 1889. John Prince took part in meetings and preached at the Chapel on special occasions.

Services were held regularly in the house-place at Home Farm as there was no chapel nearby. During his last years John Prince was involved in plans to open a new church in Hatton and was the first Trustee to sign the Indenture on 1 August 1911. However he died suddenly one morning, before building had begun. A few days later, after a short service held by Primitive Methodist ministers in the orchard at Home Farm, the funeral cortège left for St Giles in Marston Montgomery.

In recognition of his services the new Primitive Methodist Church in Hatton was named after John Prince and a memorial to him was unveiled at the Church on 16 Nov 1912, which reads as follows:

THIS TABLET WAS ERECTED BY THE CHURCHES FORMING THE BURTON-ON-TRENT, THIRD CIRCUIT TO THE LOVING MEMORY OF JOHN PRINCE, WHO WAS CALLED TO THE HIGHER LIFE OCTOBER 20TH 1911. FOR OVER 50 YEARS HE SERVED HIS CHURCH WITH MARKED ABILITY AND UNWAVERING DEVOTION IN THE CAPACITIES OF LOCAL PREACHER, TRUSTEE, SOCIETY STEWARD AND CLASS LEADER. HE WAS THE CIRCUIT STEWARD OF BURTON 1ST CIRCUIT FOR MANY YEARS, AND OF THIS CIRCUIT FROM ITS INCEPTION.

After he had served his own generation by the will of God (he) fell on sleep. Acts XIII.36

The document below contains a transcription of a sketch in the  Primitive Methodist Magazine 1910 and further family information.