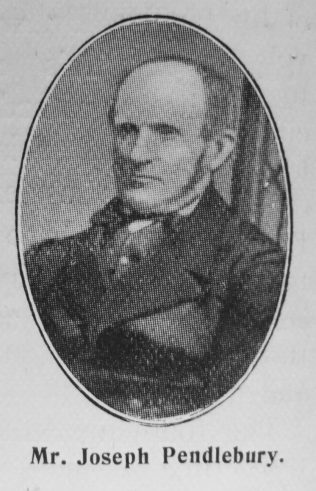 Transcription of Obituary In the Primitive Methodist Magazine by J.W.

THE Bolton First Circuit and the Primitive Methodist Connexion has lost one of its most faithful members and officials by the death of Mr. Joseph Pendlebury, in his seventy-second year. He was born in Bolton on August 21st, 1828, and on Wednesday evening, January 10th, 1900, he passed calmly and safely beyond the shadows into the clear light of God’s glorious presence. His parents were godly, and through their influence in early life he gave himself to Christ and the work of the Church. He was placed on the local preachers’ plan in connection with the Wesleyan Reform Church when he was only twenty years of age. When a youth, he was characterised by the spirit of sturdy independence and manly self-reliance. He had a mind of his own and used it. He was never a trimmer waiting to see how the wind would blow. He signed the temperance pledge when a youth, and gave himself heart and soul to the advocacy of its principles. Because of his strong temperance principles he and several others were obliged to sever themselves from the Church of the Wesleyan Reformers. He then joined our Church, and for fifty years he has been a most loyal and faithful local preacher in the Bolton First Circuit. Mr. Pendlebury was a great believer in the aggressive work of the Church, and was constant in season and out, and ever desirous for the salvation of souls. He was a trustee for several of the Chapels in the Circuit, and has occupied the position of Circuit Steward, Class Leader and Chapel Treasurer. He has represented the Circuit both at District Meeting and Conference. His early life, though not free from struggle, was free from moral cowardice. No townsman was better known and more widely respected. When a young man he commenced a newspaper business, and by perseverance and industry he laid the nucleus of what has grown into a large business. To this he added a printing business to which his sons have worthily succeeded.

Nearly fifty years ago he married one who has proved a true help-meet to him. If he had been spared until next month, they would have celebrated their golden wedding. One of his children lately said: “Father, I think you will be spared to see your golden wedding,” to which he replied, “I shall spend it in the city of the golden streets, in the New Jerusalem.” A few years ago he had an attack of influenza which caused chronic rheumatism. For the past twelve months he was confined to his bed. During the last moments of consciousness he repeated the words: “Yes, those are precious to my soul, my transport and my trust.”

The following are some of the testimonies respecting his piety and devotion to Christian work, from brethren who knew him intimately and long.

The Rev. J. Travis writes: “I have always had a sincere respect for Mr. Pendlebury. When I was in Bolton I found him transparent and upright in his conduct, willing and zealous as a worker, and, according to his means, generous in his support of the cause. There are few men who have done more for Bolton Circuits than he.”

Rev. D.T. Maylott writes: “Mr. Pendlebury was a worthy, honourable, Christian man, faithful in his household, true and loyal to his Church, sincere and without reproach in his Christian character, upright and straightforward in his business transactions, generous in his disposition, most loyal and genuine as a friend, to all this I can testify from my long acquaintance with him.”

Rev. Wilson Barrett, writing to Mrs. Pendlebury, says: “He was a good man, a sincere Christian, a loyal Primitive Methodist, dared to be a Daniel when occasion called for it, and was susceptible to kindly judgment and treatment and was most liberal and generous with his means.”

Similar testimonies are given in letters received from Rev. B. Jones, Rev. F.N. Shimmin, and the Rev. F.W. Brett who writes on behalf of the Manchester District Committee.

He was buried in the Tonge Cemetery. A service was previously held in our Higher Bridge Street Chapel, in which the Revs. J. Whittle and S.L. George took part. An impressive address was given by the Rev. G. Armitage. Representatives from all the churches in the Bolton First Circuit, and a number from the Bolton Second Circuit were present. The large gathering in the Sanctuary and the numerous wreaths testified to the esteem in which he was held.

Mr. Pendlebury has left a widow, two sons and five daughters. One of his sons is the Circuit Steward and the other the Circuit Secretary, and one of his daughters is a most devoted Sunday School teacher and class leader. A grand testimony to the home influence of our departed brother and to his widow is found in the fact that so many of their children and grand-children are members and active workers of our Church. We ask for the bereaved the prayers of our people. Our brother sleeps, but his work, character and influence abide with us. A memorial service was conducted on Sunday morning in our Higher Bridge Street Chapel, when the Rev. J. Whittle preached from 1 Thess. iv. 13.

Joseph was baptised in 1829 at Bridge Street Wesleyan Chapel, Bolton, Lancashire. His parents were James, a silk weaver (1841) and Martha.