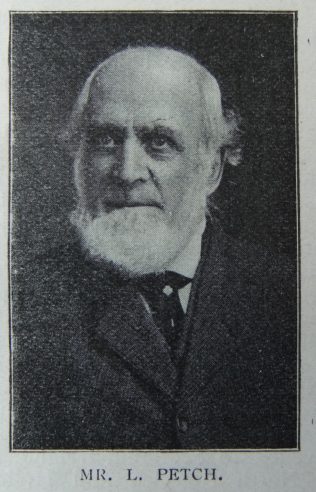 “LEESON PETCH!” It is no common name, but it perfectly fitly introduces our subject, who is no common man. Like many another knight of the last and hammer, a shoemaker by trade, he is a saint in character and an enthusiastic go-ahead Primitive Methodist by choice. Not that there is anything of the “ranter” about Bro. Petch. Whatever he may have been in earlier days, he now gives one the impression of a calm, cautious, matter-of-fact official in ordinary intercourse. But get him into the reminiscent vein, let him tell you the story of the struggles and triumphs of the days gone by, and his eyes will flash and his voice will ring again with something of the old time fire and resonance. For our friend is growing old – yes, that is the exact word to use – he is growing old, enlarging in sympathy, widening in outlook, gaining in kindliness and hopefulness and charity with the lengthening of the years; like some sweet spring days that we have known, the eventide is full of sweet, gracious, purifying influence that acts on the soul like a charm, and leads one instinctively to worship God.

It is even so with the eventide of our friend’s life. If you would know Brother Petch at his best, then see him at his own hospitable fireside, surrounded, for choice, by a few old officials of the Scotter Circuit, with a sprinkling of ministers and officials of the younger generation. Let the conversation turn on the things that have been wrought for God in Ashby and other places on this far-famed station. What mighty days they were, those days gone by! What preachers! What journeys! What meetings! What glorious, thrilling, soul-saving days! How the story glows and throbs with light and life as it flows from his lips! With what eager joy is the tale unfolded of those days of stress and song! For this is the dominant note of the struggle – a holy joy, a fine, free flaming exultance in the fight with sin and the triumph over difficulties. Those men of the former days did not stop because of difficulties stood in the way. They had been taught to expect them, and trained to conquer them. They fought the good fight of faith, and found one half the zest of life in the conflict. Nor did they fight in vain, for very substantial trophies are left of the victories they won.

But whilst taking his share in the battle, our friend’s energies were not altogether absorbed by it. Perhaps it is as an official of the Ashby society that his best and most enduring work has been done. For fifty-six years in well-nigh unbroken succession his name has stood upon this society’s class-books. He has held every office open to a layman, and done all the kinds of work connected with every stage of progress in a Primitive Methodist church. He has been class-leader, Sunday school superintendent, society steward, chapel steward, chapel treasurer, and what not. He has seen the society grow from a feeble cause with 26 members to a progressive church of 135, and still growing. He has worshipped with it in a humble sanctuary, supported by gifts in kind (one member bringing a bag of coals, another a pound of candles, and a third cleaning the chapel for free), through two enlargements and the building of a school-room, to the final erection of the Kendall Memorial Church in a central position, and with a suite of school and class-rooms that would not disgrace any church in the country.

It will be readily understood that these changes have not been accomplished without much hard toil and many sacrifices. Bro, Petch has borne his share both of toil and sacrifice, and by none is that more gratefully acknowledged than by those who to-day are enjoying the fruit of his sagacious leadership.

One of the most delightful features about our friend is the genuine esteem and affection in which he is held at home. Having secured a modest competence, he has retired from business, and devotes his leisure to pastoral work and the supervision of the interests of his Church. No more welcome visitor enters the abode of sickness or of woe. No professional pastor could be more honoured and revered. Amongst the younger members of the Church he is beloved for the ready interest in their schemes and the kindly sympathy and practical wisdom of fatherly advice. Whilst the passing years have enfeebled his physical powers, and the effect of many winters is seen in the silver whiteness of the scanty hair and snowy beard, yet they have not seared his heart nor in any wise dimmed the glowing sympathy with youth and hope and holy enterprise, which burns as bright as ever in his breast. In his domestic life, though early years were darkly shadowed with bereavement and loss, Mr. Petch has for long been greatly blessed with a wife likeminded to himself. To this truly Christian pair, how many preachers, both local and itinerant, are indebted, not only for gracious hospitality, freely given, but even more for holy stimulus and faithful counsel, and many more will join the present writer in grateful remembrance as he pays this tribute to the sterling worth and faithful service of one who has proved in very deed a “Father in Israel.”

Leeson was baptised on 9 November 1828 at Burton on Stather, Lincolnshire. His parents were Joseph, who worked the land, and Charlotte.