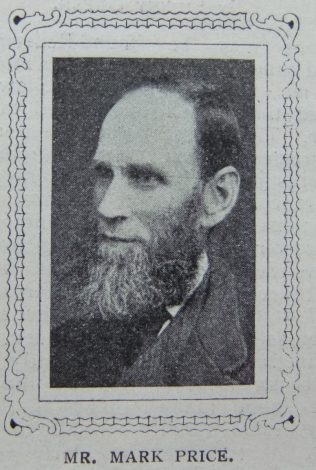 Mr. Mark Price is a product of village life. He was born in North Marston, in the year 1846, and has lived in the same village all his life. He was converted in the year 1871, and at once became a member of our church, and a Sunday school teacher, and has worthily maintained his profession and discharged his duties until the present. About twenty years ago, after holding the office of assistant he was appointed Class Leader. He is pre-eminently fitted for that position, possessing tact, discernment, sympathy, and strength of character, and all his powers are devoted to the service of God. There is nothing of lordship in his nature, nor is he officious; but he has strong convictions which are very dear to him, and which he does not fear to defend. His people are not built up with untempered mortar, or morbid sentimentality. They know that any semblance of duplicity, or unreality will not easily pass unnoticed by him, and will be properly exposed. Consequently he has not a feeble following; his personality is impressed upon his people, the society under his care is the most robust, and progressive of any in the Circuit. With his rugged outspokenness there is a deep religious note, coming from a warm and honest heart. He is as tender in his sympathy, as he is vehement in his denunciation of evil; and although a terror to evil doers, he has the love of the children, and the confidence of the young people. He has partly solved the problem of retaining the senior scholars; there are some in his school who have upwards of half a century, and none ever slip away unnoticed. In his regularity at the house of God, he is an example. If “Mark” is not there whenever the doors are opened, his friends know that it is quite impossible for him to be present. His house is the preacher’s “home,” always open. He is still in the prime of life as far as usefulness and personal influence go, and he fully intends to keep the faith, and finish his course with joy.

Mark followed his father in working the land.