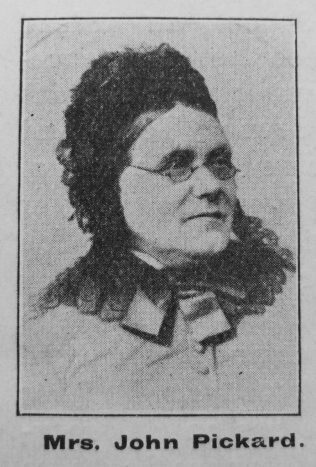 Transcription of Obituary in the Primitive Methodist Magazine by T. Tempest

Mrs. Pickard the subject of this brief sketch, was born at Sutton in Ashfield, in March 3rd, 1828 and died Nov. 15, 1902. Those dates mark the beginning and the end of a life worthy of permanent record.

She was the only daughter of Mr. Thomas Haynes, who was for many years an official of the Mansfield Circuit, and of whose sainted life memories still linger. In the year 1837 a Sunday School was opened by the Sutton Society, and on the first Sunday Mrs. Pickard, a child then of seven years of age, was taken by her father, and registered as one of the first scholars. Under the influence of the school and the church she became rooted in the Christian faith. Her marriage, in 1848 to Mr. John Pickard was followed by a long and happy life. Devoted to her husband, by her tender and unfailing affection she was ever the light and joy of the home.

She was naturally of a hopeful temperament, and having a clear conception of the principles of religion, and a firm grip of Christ her Saviour, she was always an inspiration and help to those who sought her friendship and counsel.

She was highly esteemed for her genial and kindly disposition, and her home was ever open to the servants of God on their missions of mercy. Hugh Bourne, Dr. S. Antliff, Charles Lace, and many other distinguished ministers and laymen found hearty welcome to her house.

The Rev. J.H. Saxton says of her, “I thank God that ever I was permitted to know her, and I have a very high admiration for her truly beautiful Christian character.”

The Rev. Thomas Wagstaff says of her, “The ministry of our Church has lost a true friend, one ever solicitous for their welfare” Many like quotations might be given from letters of sympathy to the bereaved husband, all pointing to her high character and useful life.

Her interest in the prosperity of the Connexion continued to the last, and as the earthly life ebbed out, and the end drew visibly near, she retained consciousness of the nearness of Christ, her life, light, and joy.

She has gone from us, her earth-weary spirit, finding home no longer in the decaying body, has passed into the presence of the God she loved and served so long.

“Fear not, for I have redeemed thee, and thou art mine,” was the last inspiring message of the Divine Father, that gave her the calmness in which she passed into
“The life of perfect love – the rest of immortality.”

Her interment in Sutton in Ashfield Cemetery, on Nov. 19, 1902, was largely attended. The Revs. M. Laycock, T. Tempest, D.M. Bowman, and J.H. Hemshall were present, and took part in the funeral service. On Sunday, Nov. 23, 1902, a Memorial Service was held in the Reform Street Chapel, where she had been a member for 60 years, conducted by the Rev. T. Tempest. Suitable hymns and the anthem “Vital Spark” were rendered with much pathos and power.

Mary was born to parents Thomas, an agricultural labourer, and Mary.