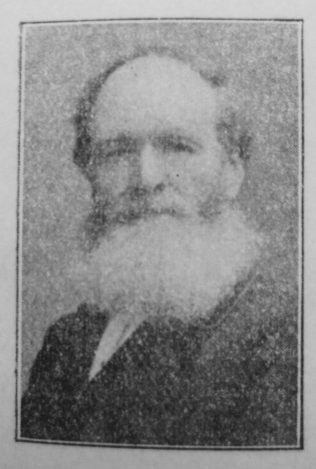 Transcription of Obituary in the Primitive Methodist Magazine by M.T.P.

When on Monday, Aug. 4th, 1902, Mr. M.T. Pickering of New Delaval, Blyth, Northumberland, passed home, there was general recognition that a strong, useful, high-toned life had completed its earthly tasks. Born at Prudhoe-on-Tyne, August 24th, 1830, he lived an exceptionally full life of loving service. In his early years he had few opportunities for education. When only nine years of age he commenced work. Realising however, that for his own enrichment and for power to serve in the betterment of others, education was of the highest import, he gave himself diligently to study. His life through he was a constant, faithful student, looking out on the many problems that concerned his fellows, and as far as he could leading them to what he saw was the true goal.

When but young he removed to Winlaton. As overman in the mine he was an influence amongst the workers for the highest good. He was, too, a force for righteousness and progress in the village. Many happy useful years were spent in Winlaton, and the villagers tell to-day of the fragrance of his life. When for conscience’s sake he must needs leave, he removed to New Delaval near Blyth. On his departure a public presentation testified to the high esteem of his neighbours and their good-will. At Blyth he entered even more fully into public labours. His life was crowded with divers forms of service. For several years he represented the town of Blyth on the Northumberland County Council. This office was to him no sinecure. He took up its tasks in a Christian spirit and did them in the strength which comes from close communion with the Lord, He attended the meetings regularly and took an active, intelligent part in all its business. One action, which brought him much praise on the one hand and censure on the other, was his conspicuous opposition to gambling on our streets. He felt so strongly on this question, saw it was so hurtful to public morals generally, and so full of perils to the young especially, that he proposed a bye-law to prohibit street betting throughout the county. It was adopted, and to-day remains in force. It has without doubt brought good results to the whole community. On the County Authority he was responsible for the initiation of much useful work. He came to occupy such a high place among his fellow-electors that his seat was regarded as safe. For a number of years he took an active part on the executive of the Northumberland and Durham Miners Permanent Relief Fund. As one interested in the welfare of the toilers, he, with others, stayed several days at Auckland Castle, the home of Bishop Westcott, while they discussed the best methods of improving the lot of the workers. Co-operation appealed to him as an agency for elevating the working people, and for a number of years he was President of the New Delaval and Newsham Co-operative Society. Politics claimed his attention, and as President of the Local Liberal Association he gave what thought and influence he could to what he held was the party of progress. He believed much was to be done by better and broader legislation for moral and material advancement. Be it remembered, however, that the first place in his heart and thought was the Church he loved.

He gave himself willingly to municipal and other matters, but the premier place was occupied by the spiritual. In daily fellowship he found strength; this was the dynamics of his whole life and of all his service. For some fifty-six years he was a Sunday School teacher. Several young men from his class are now in the ministry, while many more are local preachers and workers for God in other ways. To mark their appreciation of his devoted labours in the Sabbath School, on the completion of his fifty years as a Sabbath School teacher, the Blyth Circuit presented him with his portrait, handsomely executed. He contributed to Sunday School Conferences a large number of practical papers on Sunday School work. He had just completed his jubilee as a local preacher. In the earlier days he walked long distances to declare the evangel of Jesus. Almost to the last he went forth as God’s herald. At the time of his decease, and for several years previously, he was Circuit Steward. He was several times delegate to District Meeting and Conference. His devotion to his Church, his concern for her best interests made him trusted and loved.

Great as was the service he rendered he was greater than all. He had gifts of a high order. He was exceptionally sound in judgment. His findings always carried weight with his brethren because they knew they were the findings of one of keen insight and well-balanced intellect. With many he became a court of appeal, and in his own circuit his judgment was recognised as of the greatest value. He was progressive in his views. Both as concerns the Church and social conditions his motto was “advance.”

The greatest thing, however, was the man himself, his character. In a kindly, appreciative article, the local press wrote: “It was by his high personal character that he won the confidence of his fellow workmen and the respect of his colleagues in the County Council and elsewhere. In whatever sphere he laboured the name of Matthew Tulip Pickering stood for honesty and sincerity.”

His life-work is ended, but he still lives on in the improved conditions of his fellows, in the hearts of those he has enriched, and in the Church he so much loved. Of his sons one Is in the ministry of our Church, while another is a local preacher. What he has been to some we shall not attempt to write. Enough, he has helped many to be good. May it be our joy to hear his welcome in the morning.

Matthew was born to parents Robert Pickering, a husbandman (1841), and Elizabeth Tulip. Census returns identify the following occupations for Matthew.