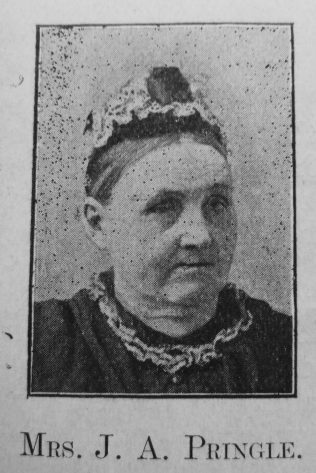 Mrs. Pringle, the beloved wife of Mr. Henry Pringle of Chester-le-Street, was born at Hetton Downs (Co. Durham) on April 14th, 1842; converted February 14th, 1861, in the historic Nelson Street Chapel, Newcastle-on-Tyne, under the fruitful ministry of the late Rev. Thos. Greenfield; married Nov. 25th, 1865, to Mr. H. Pringle; and passed into the higher life on October 26th, 1903. These four significant dates are easily written, but it is utterly impossible for any pen to adequately describe the woman; it were, easier to admire her than to describe her.

Her loyalty and devotion to Christ and His Church were qualities that were always conspicuous. Every institution of our church had in her a ready and warm supporter.

She was a Christian in the highest sense of that oft repeated word; she was simply bathed in the very spirit of Jesus; her Christianity was not in “name only, but in deed and in power.” Her whole life was full of kindly ministry and tender attachment, and now that her bodily presence has gone, her family know they have lost a most devoted mother, her husband a gentle, saintly wife, the church a loyal, consistent member; and We all have lost one of the gentlest lives it has been our privilege to know. She simply won us all by her unobtrusive ministry, her cheerful faith, her thoughtful, Christ-like regard for others needs. And yet amid all her thoughts and care for others she knew what violent personal pain was. It was through her very pained life that we discovered some of the richest jewels of her character.

If ever a spiritual Victoria Cross is given for bravery under the hot fire of pain, she has won it.

Rev. G. Fawcett, who travelled his probation on the Chester-le-Street Station, writes: “There comes before my mind the four years of unbroken kindness that was shown me by her, I always felt the atmosphere of motherhood about me when I was in her presence, she always made her house a home to me.”

Rev. John Hallam says: “She was a good woman, religious without ostentatiously showing it, loving and affectionate in her own family circle, kindly to the poor, attached to her church and its ministry.”

Mr. James Bell, Vice-President of Conference, very aptly characterises her as “the servant of God, the preacher’s friend, the angel wife.” She was that – angel of patience and of sympathy, who had leisure from herself to cheer those whose burdens were heavy – an every-day angel.

We often thought as we watched her in her long hours of pain, how good it would be for her to pass beyond the stars, never to be tired any more, never faint, never pained. That moment of limitless freedom came to her with almost tragic suddenness on the morning of October 26th, 1903.

Mrs. Pringle has gone within the veil to the Temple Service, but she has not gone beyond our loving and our remembering, and not beyond remembering and loving us.
“Is there never a chink in the world above
Where they listen for words from below?”

Surely we are strengthened by the true love that never failed us on earth and will never fail us in Heaven.

Jane was born to parents Robert, a coal miner, and Ann.