Of Gotham, Nottingham I. Circuit 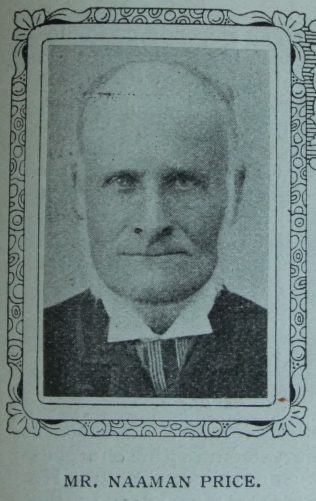 Who has not heard of Gotham? Gotham of the merry tales, of the cuckoo bush, of the wise men. Our intention is not to write respecting apocryphal legends of the past, but rather to write of one who by his work and service has greatly assisted in building up a healthy, vigorous village Church. Naaman Price was converted whilst serving his apprenticeship as a “stockinger” under the influence of his master (Robert Hogg) who was one of the remarkable class and prayer leaders of his day. Illiterate when converted, he afterwards neglected no opportunity for mental and spiritual culture. He was most regular in his attendance at the means of grace, and it being the custom for converts “to exercise” in the private meetings of the church, he made such progress as to influence the Rev. Charles Lace in proposing him as a local preacher. In this work he has excelled, and for over fifty years he has not been known to miss an appointment, however stormy the weather or distant the place; but again and again, when the River Trent has overflowed its banks, he has waded through flooded roads rather than neglect his work. He has filled our best pulpits with great acceptance. Of fine presence, good voice, ready, thoughtful utterance, he has won many trophies for the Kingdom of God. Some men do their best work where they are least known. Not so Naaman Price. He has fought many battles for his village in the cause of righteousness, for which he has suffered persecution but not in vain. Those who know him best love him the most. Our friend is now calmly waiting the call to higher service. His trade having been taken from him by reason of steam inventions, he has known the hardship of life’s struggle, but the eventide has been greatly brightened by the kindly interest of old friends together with the Common Benevolent and Local preachers’ Aid Funds.

Naaman was born abt 1830 at Gotham, Nottinghamshire, to parents Benjamin and Ann. Benjamin was a framework knitter of hosiery.

Naaman died in the spring of 1908 at Gotham, Nottinghamshire.