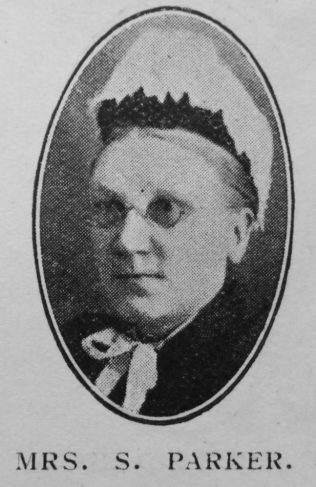 Mrs. S. Parker (of the Ebenezer Church, Hull First Circuit) was a woman of striking personality and devotion. Brought up an evangelical churchwoman, in 1850, in our Great Thornton Street Church, she entered into the assurance of faith, and thenceforward lived with abiding certitude. In 1878 she joined the brave band undertaking the hard work at Ebenezer. Soon she became assistant leader to Mr. R. Dawson, and later, leader of the Catchumen and Thursday afternoon classes. In every sphere of school and church work she took a lively interest. A teacher in the Sunday School and Institute, an ardent worker in the Mothers’Meeting, a highly esteemed leader, and a true lover of her Church, the poor and afflicted and bereaved had in her a sympathetic friend. In financial efforts of all kinds she was unwearying. Her life was marked by absolute loyalty to home, Church, and God. Her faith was strong and cheerful, in service she was tactful and considerate.

Never physically strong, after a busy life came ten years of illness, but her patience, courage, and hopefulness were fine to see. Her habits of prayer, scripture reading and song stood her in good stead. It was an inspiration to be with her, and the sick room was hallowed ground. She was indeed ‘‘a mother in Israel,’’ and her children (all of whom are associated with the Church) and many others “call her blessed.’’ A minister’s friend, many bore testimony to her goodness and grace, and other fellow labourers paid high tribute to her worth and work.