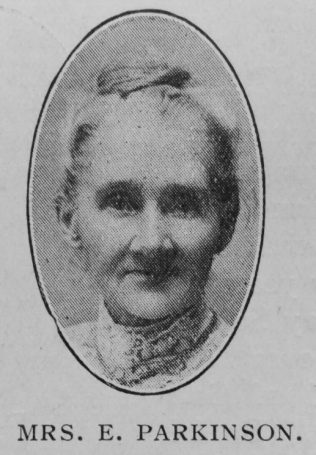 Transcription of obituary published in the Primitive Methodist Magazine by J. Charlton

Mrs. Parkinson was born at Hebburn, November 26th 1835. Her people removed to Woodhouses, Wingate, and for several years the ministers of the old Durham and Thornley Circuits made their home at her father’s house.

She was one of the first teachers in the Sunday School. For several years she served the family of the late Sir Wilfred Lawson. Married in 1883 to Mr. Ralph Parkinson, when he became blind she helped him in his work as an evangelist by reading regularly to him. She always manifested an intense devotion to her Church. She delighted in her class meeting and spent much time in visiting those sick and in trouble. In pain and loneliness she found comfort in fellowship with her Saviour. She bequeathed a substantial legacy to the trustees of Wingate Chapel.

She passed away on May 11th, aged seventy-six, and was interred at Hutton Henry Cemetery on May 14th, and a memorial service was conducted by Rev. J. Charlton and Mr. Henry Booth.

Elizabeth was born on 26 November 1835 at Hebburn, Co. Durham, to parents William House, a coal miner, and Sarah. She was baptised on 25 February 1836 at Jarrow, Co. Durham.

Census returns identify the following occupations for Elizabeth before her marriage.