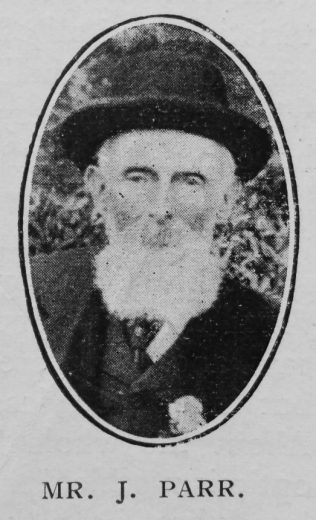 Transcription of obituary published in the Primitive Methodist Magazine by B.F.

The village church at Billinge and the St. Helens Circuit have suffered a very real loss in the death of Mr. James Parr. No one could doubt James Parr’s goodness. His shrewd common sense, high conception of duty, and practical application of the “golden rule” made him an arbitrator in many a dispute. He was loved and trusted above many.

Spiritually minded from his youth up, he was a teacher in the Church Sunday School at the time of his marriage, in 1862, after which, with his wife, he attended our Billinge Chapel and soon afterwards gave himself to God and became a member. As Teacher or Superintendent he served the School thirty-five years, and as Class Leader seventeen years. He was singularly modest and retiring, but faithful to his witness of faith in Christ. He never neglected the house of God when strength permitted, and it was pathetic to see him, when becoming feeble, sighing and longing for the sanctuary.