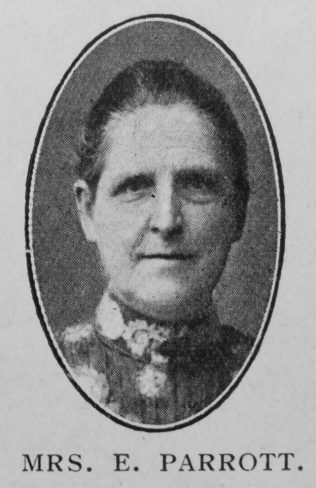 Transcription of obituary published in the Primitive Methodist Magazine by J. Wesley Waddell

On 11 January 1912, at the age of sixty-three, there passed to the homeland Mrs. Parrott, widow of the late Mr. William Parrott, J.P. and M.P. for Normanton Division.

She was converted when sixteen years of age at Methley, then in the Leeds IV. Circuit, where she married her husband. On coming to Barnsley thirty years ago they joined our Westgate Church. She was a choice spirit, and during her three months’ illness her room was the vestibule of heaven, for mind and heart were full of calm peace and triumphant faith.

The interment took place on the 15th. A memorial service was conducted in Westgate Church by the writer.

Eliza was born on 29 March 1848 at Daw Green, Dewsbury, Yorkshire, to parents Thomas Thompson, a joiner, and Jane Haigh. She was baptised on 12 June 1848 at Dewsbury.