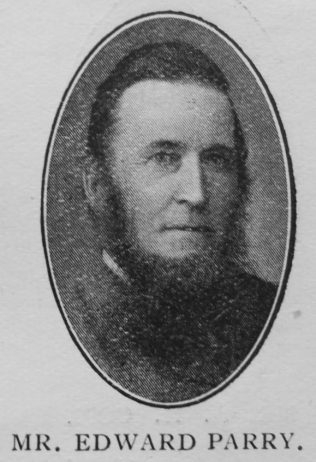 Transcription of obituary published in the Primitive Methodist Magazine by D. Oakley

Enrolled in membership when only three years of age, at his death when 76 years old, Edward Parry’s membership was of 73 years’ length, and its length was neither the only nor best feature of it. Born at Maesbrook of parents remarkable alike for their worth and service to village Methodism, he began to preach at 19, and preaching with him continued to be, for more than half a century, something more than an art—it was a passion —the passion of his Saviour to save the wandering souls of men. Of what he had done or been he never spake. Modest, humble, unobtrusive to the last, it was characteristic of the man that his last conversation with his minister should be of “The unprofitable servant,’’ and this he counted himself to have been.

It may be mentioned that he took a leading part in the erection of the very substantial chapels at Haughton and Edgerley.

His sincerity and consistency lent weight to his preaching. He was pre-eminently a man of peace, and could ever be counted upon as the loyal and active friend of every worthy minister. Mr. T. Ward Green who knew him well, says his life was a beautiful and harmonious whole

The last years of his life were spent at Morda, and in the position of Steward he was active till the very last. To me he will ever be memorable as one of the old school who was quick and deep in his appreciation of the younger ministry, and I counted it my duty to tell him in the parting how often I had been refreshed and strengthened because of him.

He fell on sleep April 8th, 1910. His body was laid to rest in the burial ground of our Knockin Heath Chapel. The Revs. W. Perry, J. Holland, and others attended.

“Servant of God, well done!
Rest from thy loved employ;
The battle fought the victory won,
Enter thy Master’s joy.”

He married Jane Minton (1839-1924) in the spring of 1859 in the Oswestry Registration District, Shropshire. Census returns identify four children.