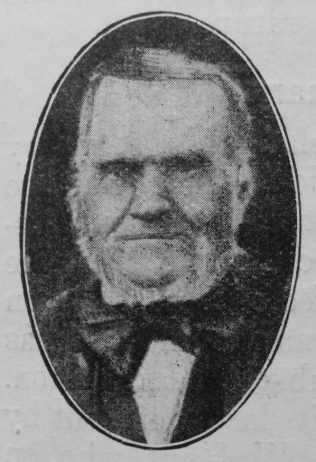 Transcription of obituary published in the Primitive Methodist Magazine by R.W. Burnett

Jonathan Parry was born about the year 1819, in the neighbourhood of Poolmouth, near Wrexham. From a very early age he was engaged chiefly in agricultural work until as a young man he turned his mind to dock and railway making, and on his marriage settled down at Llay.

Here he and his wife became connected with “the people called Primitive Methodists,” and some years later at Burton Rossett when our people were without a place in which to hold meetings, he took them into his own house. He took an active part in the building of Golly Chapel, working gratuitously in the evenings until its completion. Removing back to Llay he joined the Caergwrle Chapel and remained a member till his death.

Being, by no fault of his own, illiterate, our brother never attained to any official capacity in the church, except that for a short time he was a class leader, but he was a mighty man in prayer. He could and did take hold of the Eternal and commune with God as friend. He has been heard in a morning before starting on his six mile walk to work, praying for his family. Those prayers awakened in some of his children a holy influence which has never left them.

Though earning only the small wage of 12s. a week he brought up his large family respectably, and never failed with the portion due to the Lord, though his good wife could tell of many an ingenious contrivance to make this possible.

Jonathan Parry had a very strong attachment to the people of his choice. The love of God was his support when he came to the Valley of the Shadow of Death, January 24th, 1908, and fell sweetly asleep until the shadows flee away.

Jonathan was born abt1819 at Broughton, nr Wrexham, Denbighshire.