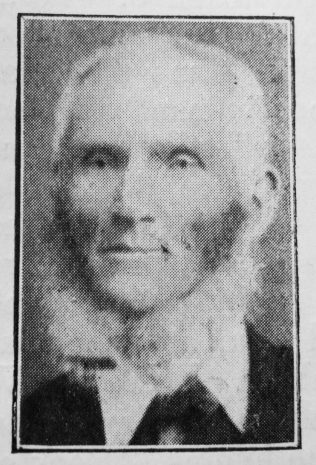 A native of Upper Weardale, Hugh Pattinson was born Aug. 3rd, 1820, Brought up by his grandmother, a woman of sterling piety and a member of our Church, he was taken by her when a mere child to the opening of a chapel, and “sat among the shavings,” for it was unfinished. He remembered, too, seeing and hearing Hugh Bourne, and was impressed by the way the old man wore his hair.

When converted over forty years ago, after much sowing of wild oats, the change was so great that he was a wonder to many. A lead miner, then for thirty years a gamekeeper, and in later years a small draper, he married Ann Emerson, of Gold Hill, a woman of strong character, great prayerfulness and sincere consecration to God. Most of her sons and daughters now sustain honourable connection with our Church. Removing to Wolsingham in 1869 Mr. Pattinson joined our cause, became a trustee, class leader, and teacher of the select Bible Class, and in all three rendered faithful and valuable service.

He was a typical Dalesman, of fine physique, a splendid hearer of the Word, and ready to serve to the utmost of his power. He was “a man of strong will, and withal tender as a child.”

He would have faced martyrdom in the cause of Christ, but his tenderness was such that people less scrupulous than himself were able to take advantage of him occasionally. Hence though a man of strenuous life he never got the due reward of his toil. Said a wholesale dealer who knew him well, ‘’I never had dealings with a truer, a more upright man.’ He was an intimate friend of the late Mr. John Robinson, the noted revivalist of St. John’s, Weardale.

After being in somewhat failing health for some time he passed peacefully away at the ripe age of nearly eighty-six, July 4th, 1906. Rev. R. Clemitson conducted a memorial service on Saturday, July 7th, in the church Mr. Pattinson had attended for thirty-seven years, and gave an address with which several letters were incorporated bearing testimony to the sterling Christian character of the deceased. A large concourse of people followed his remains to the grave. “Take him for all in all,” said the “Auckland Chronicle,” “he was one of the finest types of Christian manhood to be found in the town, and the old town will greatly miss him. May his example become contagious.”

“ ‘Earth to earth and dust to dust,’
Calmly now the words we say;
Leaving him to sleep in trust
Till the resurrection-day,
Father, in Thy gracious keeping
Leave we now Thy servant sleeping.”