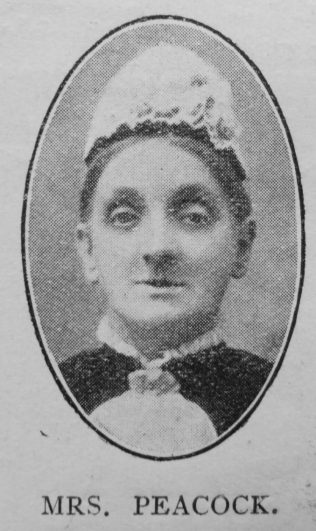 Our Church at Thornaby-on-Tees has suffered a severe loss in the death of Mrs. R.D. Peacock, which took place on January 11th, 1910, after a long and painful illness, borne with beautiful patience and Christian fortitude.

Our dear sister was one of the oldest members of our Church, and had given much of her time and strength to the Master’s cause in this corner of His vineyard, and though she had not been able for some time past, owing to failing health, to take as active a part as formerly, she remained to the end a consistent supporter of every effort for the advancement of our Lord’s kingdom, especially in the raising of money by bazaars and other means for the reduction of the debt on the Church, and our Missionary funds had in her a most generous contributor. She was always most loyal to her own Church.

The funeral took place on January 14th, and was conducted by the writer, a service being held in our Peel Street Church.

I often visited her, and always found her most hopeful and trusting in her Saviour.

While we mourn our loss, we rejoice in the assurance that our loss is her eternal gain.

Ann was born abt1845 at Hull, Yorkshire, to parents George Elmer, a blacksmith (1851), and Harriet Bardon.