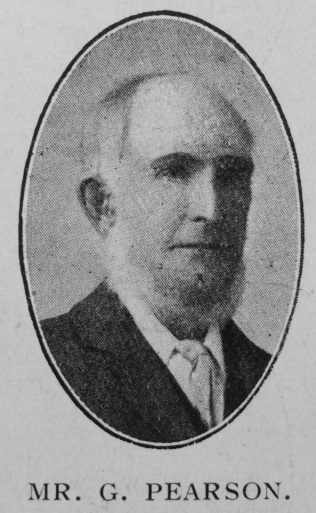 With the passing of George Pearson, the Manchester Fifth Circuit, and the Urmston Society in particular, has suffered a great loss. He was the grand old man of Primitive Methodism in Urmston, and our Church owes much to his consistent life and beautiful character. Although he lived a strenuous life and moved in humble circumstances, he was a king among men, trusted and beloved by all for his sincerity and goodness.

His conversion nearly fifty years ago was to him a delightful reality, changing the whole current of his life. He was superintendent of the Sunday School, class leader and society steward, and stood by the Urmston Church in the days when the labourers were but few. As an official of the Circuit he will be greatly missed from the Quarterly Meeting, where his humorous remarks, expressed in broad Lancashire dialect, always enlivened the proceedings.

His last days were full of hope. He died on Monday, March 4th, in his sixty-seventh year, and was interred in Urmston Cemetery

He married Sarah Elizabeth Hodcroft (1857-1934) on 12 May 1875 at Urmston, Lancashire. Census returns identify three children and an adopted daughter.