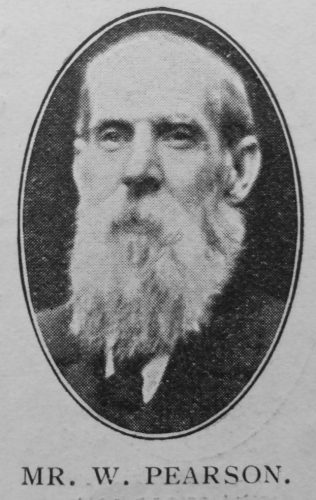 Portland Place Memorial Church, Lincoln I., has suffered a great loss by the decease of the late Mr. W. Pearson. Choirmaster for over 45 years, he created the choir and trained it efficiently to render even classical music with great acceptance. His relations with the ministers were always of the happiest kind. They all respected and loved him. It was his custom to keep a record, not only of the texts taken by the preachers, but also of the hymns announced. He rendered valuable service as a class leader and was noted for his piety.

A keen and intelligent hearer, he loved to hear a man of an inquiring and thoughtful mind. He trained his family in the principles of the religion of Jesus, and they are all gathered into the Church. Conscious of infirmity, he resigned his position as choirmaster, and was presented with a magnificent easy chair, and a gold albert and pendant. His health still further failed, but his faith in God never wavered; his testimony to the saving grace of God was most precious to hear.

He passed away Feb. 27th, 1909. Rev. John Hall conducted the funeral service, which was very largely attended. Our brother leaves a widow and family to mourn his decease.

William was born in late 1842 at Lincoln, Lincolnshire, to parents William Pearson, a cordwainer (1851), and Jane Clapham. (Editor’s Note: parents corrected in line with comment by Paul Szadorski.)

He married Fanny Seaton (1844-1927) in the spring of 1868 at Sheffield, Yorkshire. Census returns identify six children.