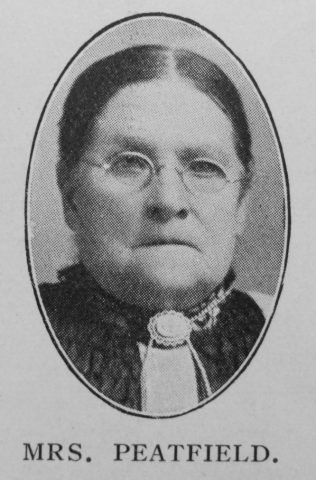 Transcription of obituary published in the Primitive Methodist Magazine by R. Curson

After a brief but severe illness Mrs. Peatfield passed peacefully away, October 25th, aged 73 years. Fifty years ago she came with her husband, the late Coun. J.C. Peatfield, to live in Retford. They were then in humble circumstances, but their home was always open to our preachers, and our Carolgate Church and Retford Circuit owe more to their services than words can tell.

Four years ago Mr. Peatfield died. Though this was a sore trial to the widow, she held bravely on. During the last fortnight she suffered severely, but bore herself with fortitude, comforted by the tender ministries of her children. She testified, amid her sufferings, that her trust in Christ was not in vain.

Rev. T. Peatfield, Balham, is her eldest son. Mr. A.E. Peatfield, B.Sc., one of the masters at our Elmfield College, is another son. Two others are local preachers in the Retford Circuit, and another is Secretary of our Carolgate Trust. Rev. W.J. Peatfield, Cradley Heath, is a grandson.

The interment at Retford Cemetery, Friday, October 29th, was preceded by a service in our Carolgate Church. Revs. R. Curson, W. Robinson, and W. Hayton officiated, and there were large and representative gatherings, both in the church and at the graveside.

Catherine was born in 1837 at Tullamore, Kerry, Ireland. her father, James, was a labourer.