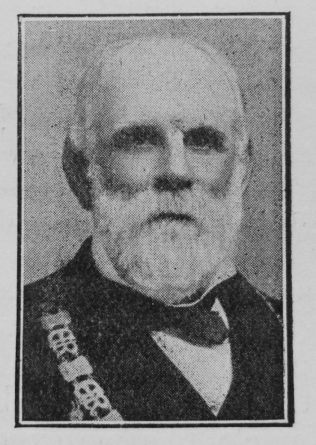 Councillor J.C. Peatfield was born August 19th, 1839, at Clarborough, near Retford. At fifteen years of age he established a fruit and potato business in Manchester, Ashton-under-Lyne and Glossop, which has since grown to be the largest wholesale market-gardening business in the Midlands,

Elected to the Borough Council of Retford in 1889 he remained a member until his death. He was chairman of several of the most important municipal committees and in 1898 was unanimously elected Mayor. His integrity and Christian character won the respect and confidence of all parties. Among those who wrote to the widow was Sir F. Milner, Bart., who, while stating he knew Mr. Pleatfield was opposed to him politically, desired to pay his tribute to his sterling honesty and independence.

For nearly fifty years a staunch Primitive Methodist, Liberal, and abstainer, he filled with efficiency and grace the offices of local preacher, station steward, chapel treasurer, trustee for several estates and class leader. He often assisted the preachers in their journeys by placing horse and trap at their disposal, His home was always open to any Primitive Methodist.

A fearless debater, his judgment was sound and his advice wise. He held many honourable positions in our Church; was vice-chairman of the Metropolitan Missionary Meeting, vice-chairman of District Meeting, frequently in the chair at the District Committee, several times delegate to Conference, and at the time of his death a member of the Centenary Committee.

He had a magnificent physique, was never ill until his sixty-third year, and when he was broken and feeble the thing which troubled him most was not his business or civic duties, but that he could not preach the Gospel and serve his church as in other days.

The end came December 16th, 1906. “I know,” he said, “whom I have believed, and I know why I know.” He was interred in the cemetery at Retford. The Mayor and Corporation followed him to his last resting place and deputations from the General, District, and Training Committees were present. Many friends were there from the Retford and Worksop stations, and the lay preachers carried his remains to the grave. We thank God for his life, character and service, and pray that his like may be largely increased in the church, in politics, in commerce and in the home.

James was baptised on 15 September 1839 at Clarborough, Nottinghamshire. His parents were John, a potato dealer (1858) and Sarah. However, later census returns identify his father married to Mary Ann.