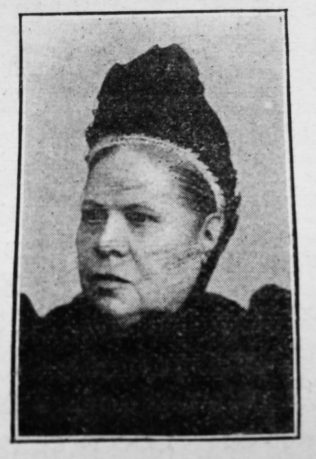 Transcription of Obituary in the Primitive Methodist Magazine by J.P.

Mrs. Phillips was born in the little town of Maidenhead, near Windsor, on the 6th August, 1830, and there, with her mother, as a child she attended the Wesleyan Chapel, ultimately becoming a teacher in the Sabbath School, and there she was married to her bereaved husband. Soon after her marriage, she, with her husband, went to America, and on her return was connected with the Primitive Methodist Society at Old Elim Chapel, in Fetter Lane, working there in God’s cause.

On her removal to Kennington she and her husband joined the Society at East Street Chapel, Walworth, and there, in 1878, after due examination, she took her place on the plan as a local preacher. She then commenced her evangelistic career which ended only within a few months of her death. She has indeed been “in labours often,” frequently leaving her home thirteen consecutive Saturdays for preaching or speaking services in London or the provinces, and she has been known to leave the bed she had been obliged to keep all day to go and speak at a meeting at night. Many souls have been brought “from darkness to light” under her ministry and have blessed the day they heard the sound of her beautiful voice proclaiming salvation.

Her presence, and work are well known and remembered among the local miners of Pennerly and Minsterly, at Swineﬂeet, Pembroke Dock, Oxford, Reading, and in many of her native Berkshire villages, as well as in very many of our London stations, where she was acceptable and successful. She was long connected with Surrey Chapel, Blackfriars, where she was a member and local preacher for many years, taking pulpit services both in the present chapel and its predecessor.

She went to her reward on August 18th, 1905, after an excruciating illness from cancer, during which period she suffered intense agony night and day, comparing the pain to a fiery furnace inside her body; but all was borne with exemplary patience, and Christian resignation. Her last words were to her daughter-in-law as she lifted up her eyes and hands, while a flush suffused her face:- “Look, Maud, look!” She has left her service for God in the earthly tabernacle for an eternal service in the heavenly, and is now before the Throne of God for ever.
“For ever with the Lord,
Amen, so let it be.”

She was interred in Tooting Cemetery, on August 22nd, 1905, the service in the Cemetery Chapel and at the grave being conducted by our esteemed and beloved minister, Rev. J. Watkin, of Surrey Chapel, in a most beautiful and impressive manner. Old friends from Kennington, and Rotherhithe, as well as from Surrey Chapel, were present at the service.

Ellen was born to parents James, a hairdresser, and Harriet.