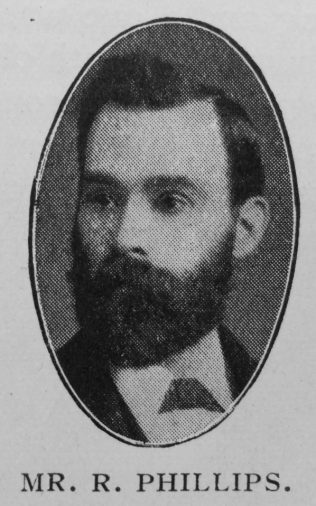 Transcription of obituary published in the Primitive Methodist Magazine by G.L.

Mr. Phillips, for many years a well known figure in Southern Primitive Methodism, has passed to the homeland. Born at Canterbury in 1850, he removed to Margate in early manhood, at once associated himself with our cause here, and became one of the most useful members and loyal officials of our Church. His love of children led him to consecrate his service to the Sunday School, which he ever regarded as one of the chief spheres of Christian work. He would spare neither time, energy, nor money that the work he undertook might be a success. There are many in the town to-day who will be the crown of his rejoicing in the day of the Lord, and who now remember him with deep affection.

Removing to London in 1900, he threw in his lot with our St. George’s Hall Mission. He was one of the original trustees, rendered useful service, and as long as health permitted was a constant worshipper there. His home also became a place of regular resort for our people as visitors to the city, especially at missionary and other special gatherings.

Some seven or eight years ago he sustained a slight accident, of which he took little notice at the time, but there developed from it a complication of diseases which baffled the most efficient medical skill, and from which he never recovered. He removed into the country in the hope that quietude and rest might assist recuperation, and in the spring of this year he came to Margate. His great desire to live was that he might be of some small service to the Church of his early love where he spent the first twenty happy years of his early manhood. But it was not to be. He was a great sufferer, but he never murmured. He calmly waited the will of God, and when the end came, July 20th, 1911, he was ready to enter into rest.

His was a sincere faith in his Saviour. He was ever loyal to his Church, and a generous supporter of its funds. The interment was conducted by Rev. R.R. Connell and the minister. May his widow and family be divinely sustained.

He married Cecilia Anne Fife (1839-1885) in the spring of 1871 in the Pastry Registration District, Kent. Census returns identify three children.

He married Louisa Ann May (1855-1946) in the spring of 1889 at Wandsworth, London. Census returns identify two children.