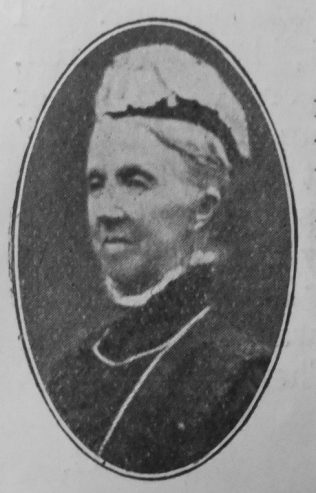 Transcription of obituary published in the Primitive Methodist Magazine by B.M.

Mrs. Sarah Pickett, the mother of the President of this year’s Conference, was born at Monckton Bassett, in Wiltshire, in 1828. Her maiden name was James, and one of her brothers, the Rev. George James, bore one of the most honoured names in Australian Primitive Methodism.

Both Mrs. Pickett and her husband, the late Mr. Moses Pickett, were brought up as members of the Church of England, but were drawn by the evangelical fervour of the early Primitive Methodists. The cause now represented by a beautiful village sanctuary at Winterbourne began with services held in their kitchen, and when that became too small for the congregation, the services were transferred to an old mill. It was during their residence at Berwick Bassett, their first married home, that Mr. Pickett won a ploughing prize, the half of which he had vowed to give to the Missionary Fund. To an agricultural labourer and his wife, with their scant wages and the growing needs of their little ones, this represented a great sacrifice, but whatever self-denial the husband proposed the wife cheerfully shared.

It was surely appropriate that the son born in that year should afterwards achieve distinction as General Missionary Secretary and should be called to the Presidential chair, chiefly in recognition of his services in that capacity. In the year of their marriage Mr. Pickett had become a local preacher and at his decease in 1885 it was testified that “he had been one of the most efficient and acceptable of our local preachers. For thirty-seven years his name had appeared on our plan, and hundreds had listened with delight to his manly, earnest, and faithful declaration of the truths of the gospel, and not a few would be the crown of his rejoicing in the world to come.”

In this work his hands were nobly upheld by his faithful wife. His frequent absences from home on preaching work imposed a greater strain on the mother of the growing family, but this additional burden was readily assumed. Though for many years an active church worker, Mrs. Pickett looked well to the ways of her household, and her chief woman’s glory was in her home. In the interests of the children the family moved to Wootton Bassett and there her memory is as ointment poured forth.

The Rev. W.C. Tonks, in his stirring history of the Brinkworth Circuit, has a very enthusiastic reference to their usefulness in Wootton Bassett society, and speaks of the Pickett family as a contribution to Primitive Methodism of the highest value. Three of the sons have entered the ministry, the Rev. James Pickett, the Rev. H.J. Pickett, of Northampton, and the Rev. F. Pickett, of Plumstead. The two daughters, Mrs. H.B. Barber, of Eaglehawk, Victoria, and Mrs. B.Moore, of Stockport, are serving their generation as worthily as ministers’ wives as their brothers are as ministers. The other members of the family are Mr.S. Pickett, an acceptable local preacher and useful official of the Leicester Second Circuit, and Mr. Frank Pickett, choirmaster, Sunday School superintendent, and deacon of the Methodist Episcopal Church, St. Louis, U.S.A.

The Rev. John Neville writes: “My acquaintance with the late Mrs. Pickett dates from 1865, thus covering a period of forty-three years. I am therefore able to bear my testimony to her excellent Christian character ever manifested by a gentle, sweet, but retiring disposition. She was reverent, devout, and constant in her attendance upon the means of grace, even when the cares of a large family demanded her unremitting attention. She was the devoted wife of a worthy husband whose heart safely trusted in her, and the loving mother of children who have risen up to call her blessed.”

Her last few years have been years of failing health, and at times of great suffering, but the suffering has been patiently borne. On Friday, June 19th, 1908, two days after her son had been elected President of the Conference, and one day after another son, the Rev. H.J. Pickett, had been appointed Vice-Principal of the Hartley College, she passed away. The interment took place at Wootton Bassett Cemetery on Tuesday, June 23rd, the Revs. W.C. Tonks and A. Marshall taking part. There in that quiet, rural graveyard she sleeps with her husband, awaiting the resurrection of the just.

Sarah was born on 2 September 1828 at Monckton Bassett, Wiltshire, to parents Edward James, who worked the land, and Elizabeth Clifford. She was baptised on 9 November 1828 at Avebury Independent Chapel, Wiltshire.

She married Moses Pickett (1824-1885) in late 1850 in the Marlborough Registration District, Wiltshire. He was working the land in 1851, worked as a labourer in a brewery in 1861 and later was a grocer’s porter. Census returns identify seven children.