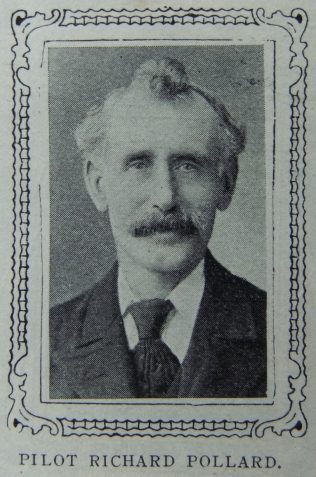 The Primitive Methodist Church of Newlyn contains many characters worthy of the reverent draughtsmanship of the idyllist. Sure of a place amongst the memorised would be Richard Pollard, son of one whose holy life is an abiding fragrance. Strong in frame and striking in appearance, he readily impresses one with his manly, straightforward, if a little brusque, demeanour. Our brother has a warm heart. He is kindly and generous, but likes to bestow his alms in secret. While yet a youth, 1872, he joined our church. The year following he became a local preacher, and so promising was he that ministers and friends desired him to enter as a candidate for the ministry. This, however, was not to be his life-work. If he had joined the ministerial ranks there is no doubt that he would have excelled, for his natural powers were such as would have resulted in an earnest and fruitful career. He has done yeoman service as a lay preacher. For thirty years he has been a class leader. If those who are sceptical of class meetings could attend his Sunday morning class, they would never forget it. Such zeal, fervour, unstudied eloquence, and real Christian testimony would overpower criticism. Such meetings are a genuine proof that the Church has not yet outgrown the need of the Methodist Class meeting. His daily business is to pilot vessels into Newlyn harbour. During eighteen years he was secretary of the Sunday school.

He is a life-long teetotaller. For many years he has been a most painstaking Society steward. To conduct the church’s business is his delight. Honoured and respected by his neighbours and fellow-townsmen, loved and trusted by his church, may he long live to do business for his master!

Richard was born in 1851 at Newlyn, Cornwall, to parents Richard and Grace. Richard, senior, was a fisherman.

Richard worked as a fisherman before becoming a pilot.