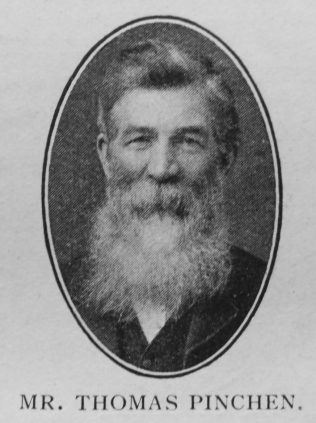 Transcription of obituary published in the Primitive Methodist Magazine M.J.

Moorsley Society, Hetton Circuit, has suffered considerable loss by the death of Mr. Thomas Pinchen, June 25th, 1909. For 31 years he maintained a lively interest in the Church. Born at Corpusty, in Norfolk, March 11th, 1845, with his family he moved to Moorsley in 1873.

After attending Sabbath School about six months he was converted. Always the moving spirit in connection with the choir, school and Band of Hope, he never neglected the weekly prayer meeting. If there alone, the prayer meeting was held.

For 25 years his house was the home of the Circuit ministers. He was loved especially by the children, and always nursed some child that had become weary in the service. While an ardent worker in every good cause, it is his sterling character that stands out in the minds of men, and he will long remain the ideal of those with whom he lived and laboured. Though no scholar, he acted as Pastor of the village for the sick and dying, especially of those who attended no place of worship.

On the day of the funeral the little chapel was packed to hear Rev. M. Johnson speak of his character and work. He leaves a widow and four sons, the eldest being the Rev. John Pinchen.

Thomas was born on 11 March 1845 at Corpusty, Norfolk, to parents William Pinchen, who worked the land (1851), and Mary Ann Harrison.