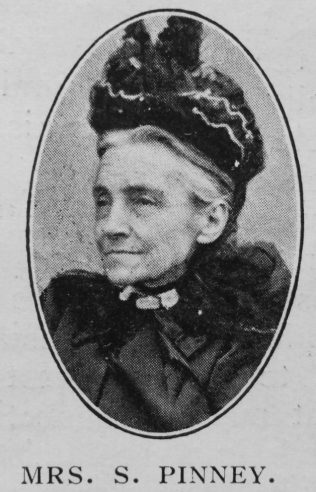 Transcription of obituary published in the Primitive Methodist Magazine by Geo. Stanyer

The Cann Society, Shaftesbury Circuit, has lost a most influential member in the death of Mrs. Sarah Pinney, November 30th, 1909, in her seventy-first year. Converted at fifteen in our Melbury Chapel, during the ministry of the Rev. G. Osborne, under the preaching of the late Rev. G. Warner she received the blessing of sanctification. When she was married to Mr. William Pinney, they settled in Cann, where he was made leader of the cause just started there.

The fine qualities of her Christian character came out in the home management and upbringing of her children, of whom her only son is a local preacher, and her two daughters devoted workers in our Cann Society. Her love for the Missionary cause was great, and she walked many miles collecting for its funds.

Her home was ever open to ministers and local preachers, where they found rest and kindly hospitality. She loved Primitive Methodism, and no inducement could wean her from its spirit, its teachings, and its ministries.

The Holy Word and good books were her delight. Private prayer, family devotions, and the public means of grace she ever valued, and when through weakness and her hushand’s long illness she was prevented from meeting with the Lord’s people, she, with her husband, would have their little service.

Her last prayer for her dear ones was, “Lord, let them live before Thee.’’

She was laid to rest in the Cann Churchyard by her own minister, in the dull grey December day, but hope and faith filled the hearts of all that knew and loved her. She had all the qualities which make a devoted Christian, a faithful wife, and a good mother. Her husband thanks God for such a wife, her children call her blessed, and the Church truly called her ‘‘A mother in Israel.”

Thus the Lord’s saints are made; thus they live, and thus they pass into the Land of light and rest. “They rest from their labours and their works follow with them.”