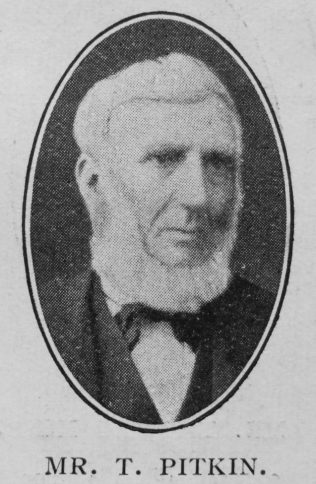 Thomas Pitkin was a native of  Swanbourne, and had the honour of introducing Primitive Methodism into the village. He was a man of more than average ability, and of marked individuality. He took a keen interest in the social and political education of his fellows, and rendered yeoman service on behalf of the Agricultural Labourers’ Union. Some years ago he appeared as a witness before a Royal Commission on the Poor Law question, and was warmly congratulated by the late King on his clear and fair evidence.

His funeral gave the opportunity for a beautiful interchange of courtesy, the writer taking the service in the Established Church, and the vicar at the graveside. It was quite an inspiration to visit this dear old brother, and to hear him speak of the ministers, and the work of the early days. His chief joy was the welfare of the Church, and though 84 years of age, he was keenly alert to its every movement.

Thomas was born abt1826 at Swanbourne, Buckinghamshire, to parents John, a labourer, and Elizabeth. He was baptised on 25 October 1829 at Swanbourne.

Thomas died in the spring of 1910 at Swanbourne, Buckinghamshire.