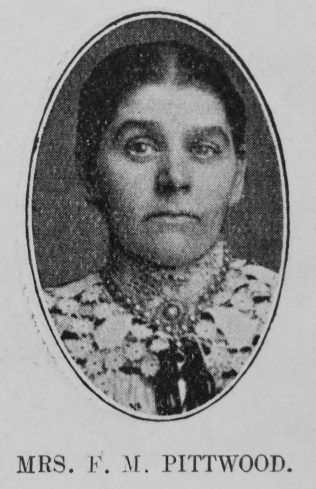 On February 8th God called to rest one who ranks among the best women He has given to Primitive Methodism. To have known Mrs. Frances M. Pittwood is a precious memory to many. Public life was not her sphere but home and church were served with a rare and beautiful devotion. She was affected by Methodist influences from her early days, and grew into conscious union with God through Christ.

In her early married life she worked in the East London Christian Mission with her husband, but coming under the influence of the Rev. R. S. Blair they joined our Crisp Street Church, Poplar. Thus began her thirty-one years’ connection with Primitive Methodism.

It is over twenty-one years ago since she came with her husband to Gainsboro’, at the opening of the Trent Shipbuilding Works, and her membership during that time has been divided between our Beckingham and Trinity Street Societies. Her heart was always young. Care and trial could not take away the cheerfulness of her spirit. Many years were given by her to work in the Sabbath School.

She has left, beside her husband, eight children, viz., six sons and two daughters. They are all of them members of our church, and in both Sunday School and Christian Endeavour. The eldest son is one of our ministers, and now stationed on the Burnley First Circuit.

The attachment of her family to the church is largely due to her influence, and like the mother of the Wesleys she has thus rendered great service to the church of her Lord.

The influence and remembrance of her beautiful Christian character is a legacy worth more than treasured gold. Her removal from earth was unexpected. A chill was succeeded by pneumonia, and in a week she had gone. She passed away on Monday, Feb. 8th, in her fifty-fifth year, and was interred in the Gainsboro’ Cemetery on Feb. 11th. The Revs. J. Burkitt and H.R. Didcock conducted the funeral ceremony, and the latter conducted a memorial service in Trinity Street Church the following Sunday.

Frances was born in the summer of 1854 at Stepney, London, to parents Hanry, a mariner, and Lydia.