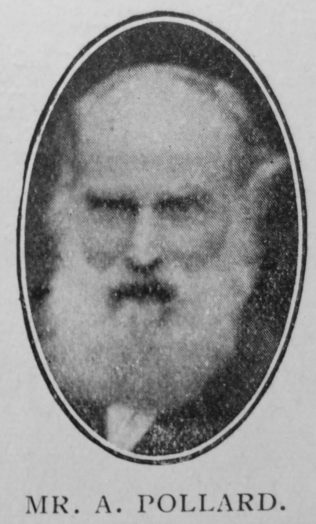 Transcription of obituary published in the Primitive Methodist Magazine by G. Fastner

By the lamented death of Mr. Ambrose Pollard on Oct. 31st, 1911, at the age of seventy-six the Church at Sammersent, Bury Circuit, has sustained a great loss. For thirty years our brother wielded an unique influence in this Society. Filling the offices of Choir Master, School Superintendent, Trustee, Class Leader and Society Steward, his value lay quite as much in the persuasiveness of his truly Christian character.

No man ever observed more the exhortation of Paul, “Let the peace of Christ rule in your hearts.” The Church showed its esteem by coming to his help in time of need. To our brother the Church was the dearest cause on earth. In Her prosperity he rejoiced; if She suffered adversity he sorrowed.

His last illness was a lingering one, but during all the months his faith never faltered. His one wish—that his stricken daughter should precede him into the Homeland —was granted. The interment took place on Saturday, Nov. 4th, and the present writer improved the death to a large congregation on Sunday evening, Nov. 12th.

Ambrose was born in 1834 at Padiham, Lancashire, to parents Ambrose, a cotton twister (1841), and Mary. he was baptised on 9 November 1834 at Padiham Wesleyan Methodist Chapel.

He married Richmal Turner (b abt1830) on 13 December 1854 at St Chad, Rochdale, Lancashire. Census returns identify one child.