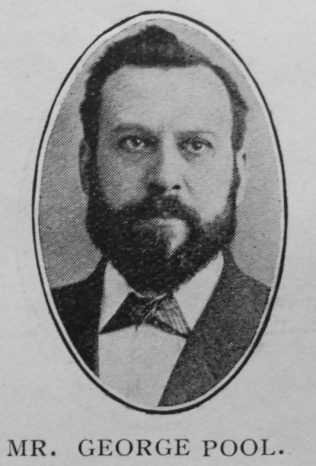 Bro. George Pool passed into the Homeland on Sunday, April 3rd. His passing means incalculable loss to the Hull First Circuit in general, but to West Street in particular, to which Church he belonged since his conversion on January 31st, 1869. Never physically strong, it is wonderful how much work he was able to do for his Lord. As stress and loss came to the old West Street Church, his love and fidelity became more manifest. To know him was to love him; to be in his company was to be made all the stronger; and the loving interest shown by those who came into contact with him, in his business life as well as his church and home life, bear eloquent testimony of the great esteem in which our brother was held.

Immediately upon his conversion he went into the School, holding different positions there for a number of years as teacher, secretary and superintendent, until failing health compelled him to relinquish in 1896. For a number of years he was assistant Class leader, and upon the death of the leader succeeded to that position. And to the time of his death he was the Church Steward and Trust Treasurer. He has represented his Circuit at District Meetings, &c, and at the time of his death was one of the Circuit Stewards, an office he had held with great efficiency for three years.

He was only fifty-eight years of age and leaves a widow and four children. The funeral took place on Tuesday, April 5th. There was a very large and representative gathering at Ebenezer Church when the service was conducted by the Circuit ministers. Rev. W.A. Hammond paid eloquent tribute to the memory of our brother. On Sunday, 10th inst., Rev. George Hind conducted a service in West Street Church. There was a very large number of friends present, and fitting tribute paid to his noble life, and praise to God for his triumphant passing to the life more abundant.

George was born abt1852 at Broughton, Lincolnshire. I have not been able to identify his parents in online records. In 1871 he was living with an uncle in Hull.

He married Emily Smith (abt1852-1922) in the summer of 1873 at Hull, Yorkshire. Census returns identify six children.