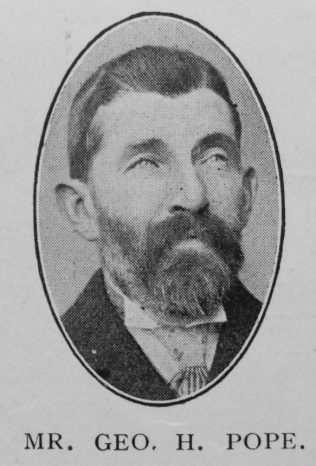 Transcription of obituary published in the Primitive Methodist Magazine by A.A. Kidwell

In the death of Mr. George H. Pope the Whitehall Church in the Bristol First Circuit has lost one of its most beloved officials. On Saturday morning, December 10th, 1910, he went about his usual duties, but was called “home” before dinner-time. The suddenness of his death proved a great shock to his delicate wife, his family of eleven children, to his relatives and friends. The funeral was a large one, attended by many persons representing different Christian institutions. Twenty-one beautiful wreaths were placed upon his grave.

His church was his main interest in life next to his home. He was assistant Society Steward, superintendent of the Sunday School, and President of the Band of Hope. He was a weak man physically, but his calm faith in God made him a mighty spiritual force. Though many people are often complaining, the writer never heard Mr. Pope murmur or say an unkind word about anyone. A kind and encouraging word could always be expected from him. In his presence one’s troubles seemed to vanish and a peace entered one’s life. In business meetings he was usually quiet but influential. His quiet, refined manner calmed irritable and impatient.

Children looked tenderly at the window of the room that contained the coffin of their kind-hearted superintendent.

George was born in 1855 at Abersychan, Monmouthshire, to parents Henry Pope and Caroline Young.