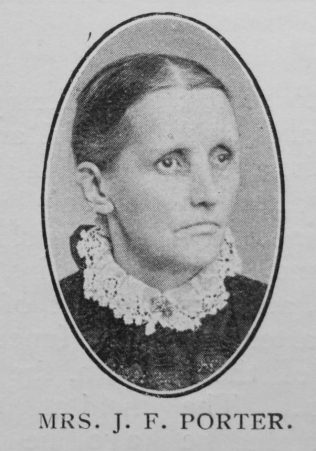 The late Mrs. Porter was born at Castle Eden, County Durham, in the year 1845. Her parents were devoted Primitive Methodists and were highly respected members of the Old Shildon Circuit. From infancy she was brought up in the nurture and admonition of the Lord. She became attached to our Church not by any pressure occasioned by excitement connected with revival services. The quiet, impressive, winsome attraction of her pious home led her to Christ. In her early years she took a deep interest in Church work and the Sunday School, and at the age of seventeen years joined the Church.

Thirty-nine years ago she became the wife of the Rev. John Fletcher Porter. The first five years of their happy married life were spent in Canada. Returning to this country some thirty-four years ago, the call came to them to take up their abode and work in East London. Those were days when difficulties were many and friends few. They had to open a new mission, establish a Church, gather a congregation, and provide to a large extent the funds necessary to sustain such work. The self-denial of those early years is only fully known to themselves.

Mrs. Porter, by temperament as well as choice, was one of the quiet, unassuming, plodding workers to whom our Church owes so much. Her gentle manner and sympathetic nature, made her during the past thirty-three years a ministering angel in many a sick and desolate home in the East End. It could be truly said of her, “She stretcheth out her hand to the poor; yea, she reacheth forth her hands to the needy. She openeth her mouth with wisdom, and in her tongue is the law of kindness.” In the depth of true spirituality, in real unostentatious goodness of heart and nobility of life, in cultured sensitive sympathy, in intensity of pity for the poor and suffering, and in practical self-denial for the good of others and for Christ’s sake, she held a front rank position in the noble sisterhood that has done so much to sweeten and purify the life of East London.

On Saturday, October 1st, 1910, she entered into the eternal rest, and on October 8th, the interment in Ilford Cemetery of her remains was accompanied by a most striking expression of widespread affection and respect.

“Blessed are the dead which die in the Lord.”

Jane was born in 1845 at Castle Eden, Co. Durham, to parents Thomas, a colliery overman, and Margaret. She was baptised on 31 may 1845 at Monk Heselden, Co. Durham.