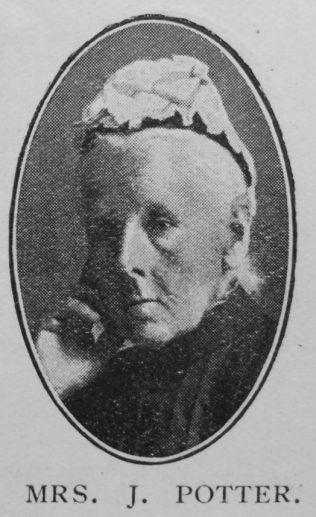 Transcription of obituary published in the Primitive Methodist Magazine by J. Jones

Mrs. J. Potter, who passed away to her heavenly rest on Saturday, March 5th, after only a few days’ illness at 74 years of age, had been a member of the Primitive Methodist Church for nearly 60 years. To her the Fleet Society (Basingstoke Circuit) owes its existence; for in 1860 she opened her house for preaching, and very soon afterwards started a Sunday School. Of that Sunday School she has been superintendent for nearly 50 years, and was at her post conducting the school —morning and afternoon—only five days before her death. She was beloved by all, her willingness to help anyone in need gaining the affection of all who knew her. Her interest in every thing connected with Primitive Methodism was deep and constant. When the present chapel and schoolroom were built she was exceedingly active in securing the necessary funds, and it was a great joy to her when the premises were declared free from debt.

A most devoted wife, one of the best of mothers, and a true servant of the Chruch, “she hath been a succourer of many.’’ Scrupulously conscientious in her dealings with all, the house has been the home of the preachers for many years, and strangers and young people coming to live in Fleet were always welcome to her home, and by her kindly advice and words of comfort she proved herself “a mother in Israel.’’ But her special work was among the young—in the school and Band of Hope.

The funeral was largely attended, conducted by Rev. J. Jones, assisted by Rev. W. Owen and Messrs. Myland and Hopgood, a special feature being the singing of the Sunday School scholars under the guidance of Messrs. Kent and Stone. To Bro. J. Potter, and his sons, Rev. H.B. and Mr. S. Potter, and the family, the sympathy of the Circuit is extended. We thank God for her life, character and work, and the fragrant memory left behind.