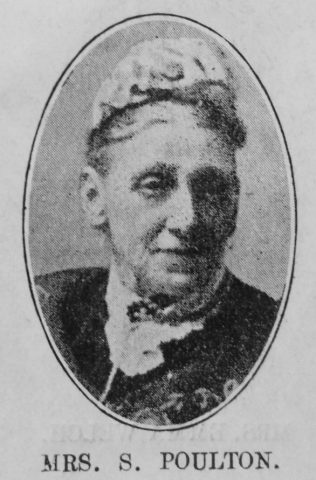 Mrs. Poulton was born at Oldbury on August 15th, 1832, in a religious home. Her mother was a strong, good woman, and her father was engaged as a local preacher in proclaiming the truths of heaven. She came to reside at Greets Green, in the West Bromwich Circuit, when eleven years of age, and for sixty-five years was identified with our school and church.

Mrs. Poulton was endowed with an imperial intellect. She knew how to think and to think clearly. She possessed a hive of anecdote, and could tell stories in a way which entertained her friends for hours. Her life was a life of gracious ministry. She was a friend in need, reliable, skilful, faithful. She lived not for self, but for others. The wet night was forgotten in the joy of service. Through deep snow-drifts, along perilous roads she trudged at any time when the “call” for service was given.

Her piety was expressed in morals, her love for God in beneficent acts. Few people carried less religion on their sleeves than she; few carried more true religion in their hearts. She rose to her highest powers around the fireside, and yet, from friendly talk and merry laughter, she could turn with rapid transition to earnest intercession, and no “Amen” was more sincere than hers. There was a charm about her which a kindred spirit could not fail to realise.

“Let me die in harness,” she often prayed. In the twilight of the morning, as she trod the path of duty, she was called into the higher spaces at the age of seventy-six. Her death threw a gloom over the whole district. The chapel was crowded to excess when her earthly remains were laid to rest, and many were the expressions of grief as the people realised that their friend so true and tender would no longer minister to their needs. Even at her advanced age she was in great demand in cases of sickness.

We pray that her sorrowing family may be sustained by God, and that all who passed down the sorrowful road may be inspired by her beautiful life.

Sophia was born on 15 August 1832 at Oldbury, Worcestershire, to parents William, an iron shingler, and Sophia.