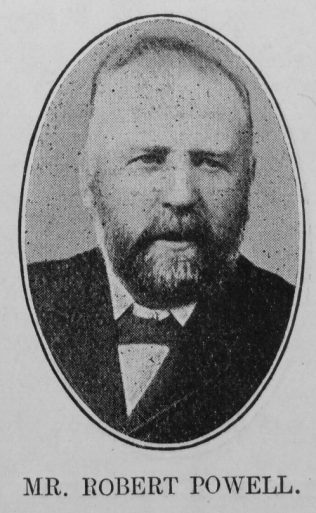 Transcription of Obituary published in the Primitive Methodist Magazine by W. Wardle

The Chatham Circuit has sustained a serious loss, in the unexpected death of Mr. Robert Powell; October 15th, 1908, he peacefully fell on sleep. Mr. Powell was born of poor parents, in the village of Orsett, Essex, some sixty-five years ago. His parents removed to West Thurock, where in tender years he was sent to learn carpentry with his father. He became exceedingly rough and the terror of the village, but about the age of twenty, removing to Grays he came in touch with our people, gave himself to Christ, joined our little society, and from that day became one of God’s stalwarts. One of the greatest readers I ever met, he was always abreast with the times. He had taken the “Primitive Methodist” from the first copy till the week he died, and had read every “Quarterly Review ” from the first quarter of its publication as the “Christian Ambassador.”

He was a good preacher, an able platform speaker, a trustee of several of our chapels, and a noble supporter of the work. Nearly twenty years ago he left Grays and came to Rochester as manager to one of the great cement factories. He soon become popular, and was elected and sat for many years as a member of the Council. He was a great politician, a representative of labour, and had for some long time been one of the chief Directors of the Wholesale Board of the Co-operative Society. He was true till death.

On October 21st the whole city was in mourning. The branches of the Co-operative Societies all through the district closed for the afternoon and the members in hundreds lined the streets on either side from the residence to St. Margaret’s Cemetery bare-headed to do honour to their great leader.

At the cemetery the service was conducted by Rev. F.R. Brunskill  and the writer. After a hymn was sung the writer committed to the grave all that remained of a noble man who fought a noble fight —and helped to build up one of our finest churches both in Essex and Kent.

Robert was born in the summer of 1843 at Orsett, Essex, to parents Stephen Powell, a wheelwright (1851), and Elizabeth Zachary. He was baptised on 29 October 1843 at St Giles and All Saints, Orsett.

He married Emma Meadowcroft (1837-1884) in the summer of 1866 at St George in the East, London. Census returns identify three children.