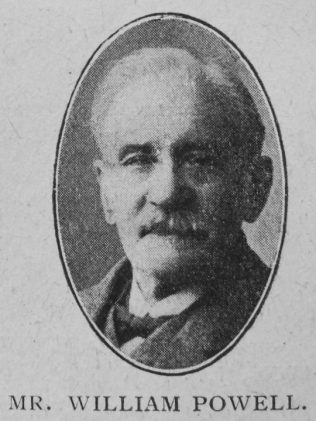 Queen’s Road, Nuneaton, lost one of its oldest and best when Mr. W. Powell passed to the homeland in the sixty-sixth year of his age. For many years he suffered bravely, but release came on November 6th, 1922, when God said “It is enough.” The end came unexpectedly.

Until physical infirmity prevented he was a most active member and official of our Church and Circuit. Nearly fifty years ago he joined the Primitive Methodists, and for forty-six years was a most intelligent and popular local preacher on our plan. Before Nuneaton separated from Hinckley he was circuit steward, a position he had held for a period of fifteen years. For a long time he was superintendent of our Queen’s Road Sunday school.

Very largely to the labours and devotion of Mr. W. Powell and the late Mr. W. Taberer we owe the splendid church and schools which stand in Queen’s Road, of which property they were both very prominent trustees.

For more than forty years Mr. Powell carried on business in the town as a painter and decorator, and was highly respected by all who knew him for his moral integrity and public service. Although, through suffering he was unable latterly to take any very active part in Christian work, he maintained until the last a deep and abiding interest in all that concerned our Church, and rendered most generous financial assistance to all its institutions.

We laid his mortal remains to rest on November 9th, 1922, in the Nuneaton Cemetery. Special mention was made of him by the Rev. A. Walliker on Sunday evening, November 12th. Much sympathy is felt for the widow and family, who must feel his loss most keenly. We humbly submit to the will of our gracious Father, and pray that when the last evening of life shall come for us we may all be found at home in the morning.

William was born in the summer of 1856 at Burbage, Leicestershire, to parents Thomas Powell, a stocking frame-work knitter (1861), and Martha Hewitt. He was baptised on 2 November 1856 at Burbage.

He married Emily Greenway (1862-1951) in the summer of 1899 in the Coventry Registration District, Warwickshire. Census returns identify one child.

William died on 6 November 1922 at Nuneaton.