A friend of the Poor 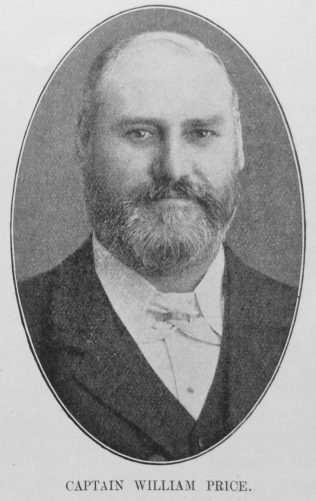 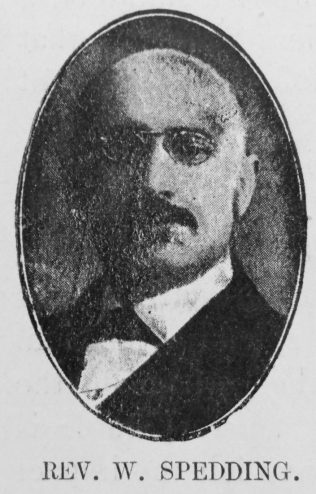 Transcription of Article published in the Primitive Methodist Magazine by Rev. W. Spedding

CAPTAIN WILLIAM PRICE, of Birkenhead, is the possessor of a personality at once attractive and unique. With exceptional gifts nature has liberally and richly endowed him. So much so, that to know him is to readily and ungrudgingly render the tribute here given. His presence reveals a man of splendid physique and fine proportions. Built upon a large plan, strongly and sturdily, he looks every inch a man and one who with his frank and genial countenance immediately commands attention and inspires confidence. At first sight, you feel disposed to exclaim, as did President Lincoln, when introduced to Walt Whitman, “Well, ie looks like a man.”

Mentally, he is a man of large resources, with a vigorous and well-balanced mind. Quick in perception, sound in judgment, with sane, and practical habits of thought, and great constructive ability, the weightiest of business matters fall easily within the compass of his mind. If Charles Dickens’ nostrum is correct that “width and wisdom go together,” then the subject of this sketch is a striking exemplification.

Naturally a shrewd and intelligent man, with a greater knowledge of men than books, and of the practical rather than the theoretical side of things mundane, his outlook upon life is reasonable, sympathetic, and optimistic.

Withal, he is a man of kindly and beneficent disposition, with a deep vein of pure humour in his nature, and a ready wit, so that his presence is always cheerful and stimulative.

Everybody likes the “Captain,” and there are but few who can resist the softening and warming influences of his sunny personality. A world-wide traveller, vigilant in observation, and with a keen eye for the humorous side of an incident, he is full of happy reminiscences which he can tell in a style peculiarly his own, and which never fails to win over his auditors, who are alternately moved to tears and laughter.

An exceedingly busy man he has very little time for reading, and if he has any preference it is for poetry and especially the humane and sympathetic poetry of Will Carleton, many of whose poems he is able to recite. The springs of sympathy in his nature are very deep and his natural kindheartedness finds expression in a multitude of helpful ministries, especially towards the poor and needy.

In religion, he is a man of simple and unquestioning faith, with a fervent devotion to evangelical truths and ideals. Conscientiously and consistently loyal to the standards of morality and religion placed before him in his boyhood, he never swerves from what he believes to be the salient principles of righteousness and honour. Without pretence he is deeply and essentially religious, though, as Dr. Robertson Nicoll recently stated of his father, he rarely speaks of it to others.

Apart from any attempt or claim to perfect colouring in the picture, there is undoubtedly a blending of elements in his personality which go to make up a type of manhood commendably strong and worthy of emulation.

Captain Price has been extremely fortunate in the physical, mental, and moral endowments of his nature and the sterling qualities possessed by him have been allowed full play in the course of his life. Starting business in humble conditions he has by characteristic pluck, and perseverance, forged his way to a position of comparative affluence and comfort.

At present he is the chairman of the company directing what is known as the “Hill Line” of steamers trading to all parts of the world. In this business he is directly associated with his brother, Mr. John Price, a man highly esteemed for his great personal worth.

Improved circumstances have not dwarfed his manhood in any sense, but the increase of material wealth has given to him larger opportunities for the expression of that practical sympathy which is natural to him. His supreme pleasure in life is to relieve the poor. Than this, he knows no higher ambition and no purer joy. As J. Russell Lowell wrote of Tom Hood, so may. it be affirmed of Captain Price:

“Stranger, if to thee
His claim to memory be obscure,
If thou wouldst learn how truly great was he,
Go, ask it of the poor.”

For twenty-seven years he has gathered together every Christmas Day morning about five hundred of the poor children of the neighbourhood, near to which he resides, and entertained them to a warm, hearty breakfast. It is a treat to see those poor, little, wan faces and darkened lives brightened up for an hour or two on Christmas Day which for at least one kindly dispensation is made memorable to them.

In the afternoon of the same day, and for the same number of years he has invited the aged and the poor of the district to a substantial tea and a bright concert. With tragic stories written upon hundreds of their countenances these people come, and for at least one night of the year forget somewhat the sadness and weariness of their lives. At the close of the day there is many a “God bless the Captain!” from hearts and lives made sweeter and richer by his kindly philanthropy.

We recall the words of F.W. Robertson: “The time is coming when the warrior’s wreath will be seen to be blood-dabbled, and the law-lord’s coronet only a homage to talent. Real bravery is active goodness. These are the grander walks.” Or more suggestive still, the words of our great Master: ‘‘Inasmuch as ye did it to one of the least of these ye did it unto Me.”

Not in this way only, but in many others, quietly and unostentatiously, does our friend seek to ameliorate the conditions of poverty and sorrow-stricken lives. If kind hearts are more than coronets, then is he entitled to an honourable place in the aristocracy of manhood. Captain Price, like his father, the late Mr. John Price, who was a famous local preacher in West Cumberland, is a loyal and generous Primitive Methodist. It ought to be said that in all the charitable work to which he gives himself he is affectionately supported by his good wife and family, and for the same is held in high repute by the entire church and community.

William was born in late 1851 at Harrington, Whitehaven, Cumberland, to parents John Price, a ships carpenter, and Mary Sinclair.

Census returns from 1881 describe him as a ship owner. He was not found in the 1871 census, presumably being overseas as a mariner.

He married Mary Brown (b abt1849) in early 1874 at Liverpool, Lancashire. Census returns identify six of seven children.