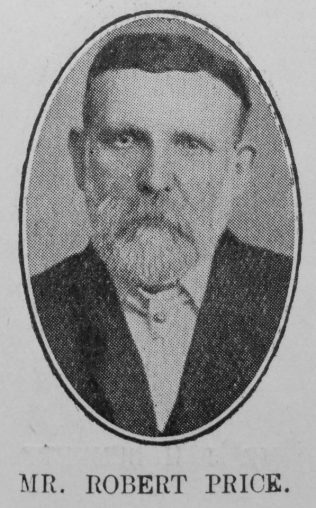 Robert Price was born at Kilpeck, Herefordshire, in the year 1849. His father was a farmer, and made no profession of religion. His mother, who was the daughter of a clergyman, was of a gentle, kind disposition, and very devout, and Robert was trained in the teaching and practice of the Episcopal Church of England.

His first serious thoughts in relation to religion were associated with his preparation for, and the act of confirmation by the bishop. After being apprenticed at Hereford, and then removing to London, he was at the age of seventeen, subject to renewing grace, and joined the Primitive Methodist Church, becoming a member of Society at Bethnal Green, where he was soon recognised as having gifts, and became a local preacher. For years he did valiant service in connection with this struggling cause, and heroically undertook liabilities in seasons of anxiety.

During the forty-two years of his church life he has been a member. He was called by business changes to move to Hereford and Bournemouth, but his work was chiefly in London in connection with Customs House, Woolwich, Chelsea, Fulham and Chiswick. At all the places his services were highly appreciated. The last five years were spent at Chiswick, where by his quiet, diligent, constant service he won the esteem of the people in a marked degree.

It was to him and to his family and friends a great shock when in the autumn of last year the doctor, who was called in for what was thought to be a passing illness, ordered his removal to St. Thomas’s Hospital for operation. This was, however, found impracticable, and he gradually with much pain passed on to the goal which he reached on January 14th, 1909.

His affliction was borne with remarkable patience. He was strong in faith. “I have served my God in all good. conscience from my youth, and He will not fail me now; I am not.afraid to die, my trust is in Jesus; God be.with you till we meet again,” were amongst his last utterances. A good husband, tender father, faithful friend, he leaves a good testimony behind.

He married Annie Forsey (1865- in the summer of 1885 in the West Ham Registration District, Essex. Census returns identify five children.