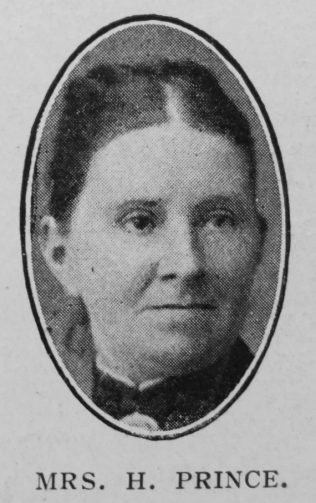 Transcription of obituary published in the Primitive Methodist Magazine by T.J.M.

When Mrs. Prince passed to the Homeland on February 3rd last, our Church lost one of its most faithful workers. Previous to her coming to Barton she was an active member of the Rocester Sociey in the Ramsor Station, and she and her late sainted husband were in a very large measure responsible for the erection of our beautiful chapel there.

Her end came suddenly, and she was interred on Feb. 7th at Marston Montgomery. On Feb. 18th we held the memorial service, which was attended by a crowded audience.

At our March Quarterly Meeting the following resolution was passed unanimously, many of the brethren speaking in its support:— “That we record with sincere regret the death of Mrs. Henry Prince of Barton. We recognise in Mrs. Prince an “elect lady of God” and a choice gift of His to our Church, of which she was a member from her earlier days. We thank God for her service and sacrifice lovingly rendered to our Barton Society during the past eleven years. Our Sunday School and Band of Hope there owe their existence very largely to our revered friend’s unceasing toil and unfailing interest, and at the time of her death, though 66 years of age, she was the Secretary of the Sunday School. We gratefully record her sympathetic generosity, her Christly character, and her grace of hospitality. We are glad to learn that the faith by which she lived brought her comfort and triumph in the hour of death, and we note with gratitude that in her bequests she remembered the young life which she lived to serve and bequeathed £10 each to our Barton Sunday School and Band of Hope, and a like amount to our Connexional Orphanage. We tender our sincerest sympathy to the relatives who have been bereft.”

Ann was born in 1845 at Swinscoe, Staffordshire, to parents Samuel Archer, a farmer of 81 acres (1851), and Hannah Harris. She was baptised on 16 November 1845 at Blore Ray, Staffordshire.

Census returns identify the following occupations for Ann before her marriage.