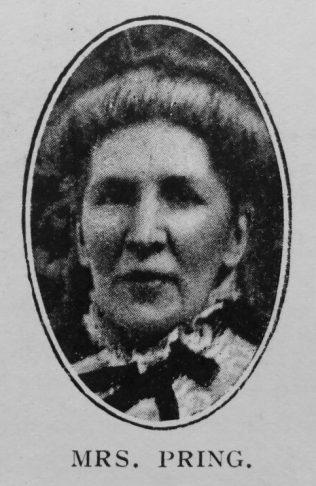 Transcription of obituary published in the Primitive Methodist Magazine by S.E.

On Friday, Dec. 1st, 1911, there passed from earth to heaven at Whitstable-on-Sea, Mrs. A.M.A. Pring, widow of the late Rev. H.J. Pring. She was born in 1847 at Blean House, Boughton-under-Blean, near Faversham, and was daughter of the late Mr. William Plommer, who for many years was an acceptable local preacher.  Mrs. Pring was one of three sisters, all of whom were married to ministers, viz., Revs. H.J. Pring, William Wheeler, and J.R. Gregory (Wesleyan).

For many years Mrs. Pring was Sunday School Teacher and Organist at our Boughton Chapel, previous to her marriage. In reference to these early days Rev. R.R. Connell writes:— “It is upwards of 48 years since I first met your mother at the house of her father, Mr. W. Plommer. I distinctly remember her going from Boughton to Chilham-Lees every week-day to teach in a school which her father opened at his own expense for the poor of that village.”

Married in 1870 to Rev. H.J. Pring, she laboured with him on the following circuits:— Whitstable, Reading, Baldock, Silchester, Bedford, Hayward’s Heath, Motcombe, Chipping Norton, Cirencester, Bromyard, Marlborough and Pewsey. While at Pewsey her husband died in 1895. She then removed to Kent, and for fourteen years resided at Faversham. For the last two years her home was at Whitstable.

The end came suddenly after but four days’ illness. She has left four sons and two daughters to mourn her loss, one son being Rev. H.W. Pring, of Manchester, an esteemed minister of the Wesleyan Methodist Church. The remains were laid to rest in the Wesleyan churchyard, Boughton, near to those of her late husband.

Adeliza was born in 1847 at Boughton-under-Blean, Kent, to parents William Thomas Plommer, a farmer (1851), and Caroline Butler.