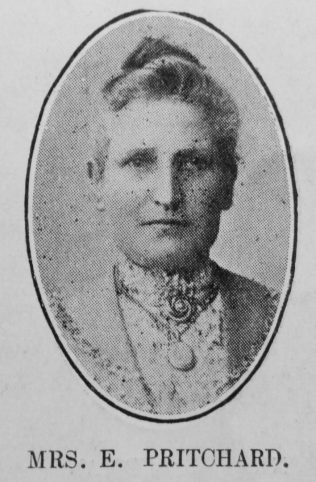 MRS. ELIZABETH PRITCHARD, daughter of George and Thirza Wootton, and beloved wife of W.H. Pritchard, J.P., of Wednesfield, who passed away May 20th, was born in 1853. She began in early life to develop that sweetness of spirit and gentleness of bearing which made her life rich and fragrant. She could never date her conversion, or point to a decisive moment when she consciously gave herself to God. From her childhood up, she had the clear open vision, and was ever conscious of the Father’s love. She was so finely strung, so spiritually sensitive and responsive that she appears to have unconsciously responded to the Spirit’s approach and touch. In the church and service of God she found her truest joy and greatest pleasure. To her God’s house was the dearest spot on earth.

Her sterling Christian character, her cultured mind, her gentle bearing, her wide sympathy, her unobtrusive but charming personality appealed to the brightest and best in those around her, and won the love, the confidence and admiration of all.

For many years she was a teacher in the Sunday School, organist in the church, and to the last was an assistant class leader. She was a constant visitor of the sick, a great friend of the poor, and an ideal wife and mother. During her illness she was tenderly nursed and comforted by those who loved her dearly, and as the end drew near, her face became bright as her spirit passed into the brighter and more assured vision of her Father’s face.

Elizabeth was born in 1853 at Wednesfield, Staffordshire, to parents George, a grocer (1861), and Thirza.

She married William Henry Pritchard (1855-1934), a tin trunk maker (1901), in the spring of 1880 at Wednesfield, Staffordshire. Census returns identify five of seven children.

Elizabeth died on 20 May 1909 at Wednesfield, Staffordshire.