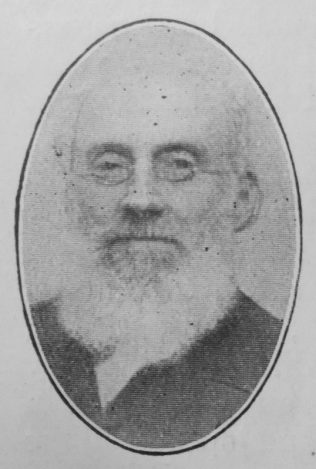 Transcription of obituary published in the Primitive Methodist Magazine by J.G.

Thomas Proverbs was born at Wednesbury, November 17th, 1830. His early religious life was associated with Wesleyan Methodism. He became a local preacher, and being intelligent and of studious habits, his messages were thoughtful and acceptable. He had high ideals of life, and scorned anything that was low or vulgar. He was connected with the ecclesiastical controversies that resulted in the Wesleyan Reform movement, and being radical and progressive, he was forced to leave the church of his early choice.

On leaving Wednesbury for Banbury he joined our church, and he and his family were soon engaged in active Christian work. He took his place as a local preacher, and did useful secretarial work. His enthusiasm, however, was devoted to the Temperance cause. He identified himself with Temperance organisations, and worked hard with voice and pen for the spread of Temperance principles. He has preached and lectured on the steps in Wednesbury where John Wesley stood to proclaim his evangel. All the members of his numerous family are life abstainers.

Eventually his health gave way, and the rest of his life was pain. He removed to Birmingham and for a short time devoted himself to preaching and other aggressive Christian work. But increasing pain compelled him to retire, and he spent the rest of his days in quiet. He was methodical, precise, punctual; a lover of books, broad in his views, and generous in his sympathies. Throughout the long years of suffering he was patient and uncomplaining. He would sometimes express a longing for the eternal rest, but was quite content to wait the Lord’s time. His great text was, “In quietness and confidence shall be your strength.”

His devoted wife was his constant companion and untiring nurse. On the morning of November 30th, 1907, a change was noticed, and the eldest son was sent for. “I am sinking deeper, deeper,” he murmured. ‘Yes,” said his wife, “deeper sink to higher rise.” “Ah, that’s it. I am all right now.” And so it was not death but falling asleep.

His memorial sermon was preached by the Rev. G.E. Rudram in Selly Oak Chapel. At the service a tune called “Rest,” composed by our departed father, was sung to the hymn, “Rock of Ages.” There we will rest till the storm is over.

Thomas was born on 17 November 1830 at Wednesbury, Staffordshire, to parents John Proverbs, who worked the land (1841) and was later a miner, and Mary Ann Griffiths. He was baptised on 6 February 1831 at St Bartholomew, Wednesbury.

Note: His probate record gives the date of death as 28 November 1907.