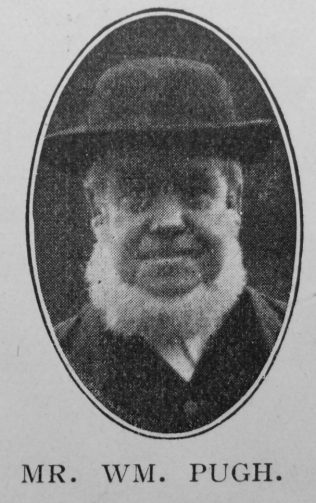 Transcription of obituary published in the Primitive Methodist Magazine by R. Crewdson

Primitive Methodism in Stockport has suffered a serious loss in the sudden decease of William Pugh, November 19th, 1910. Born in the village of Baschurch, in Shropshire, 77 years ago, at the age of ten he was sent to our Sunday School. When quite a young man he entered into conscious fellowship with Jesus Christ, and was called, not long after, to be a preacher of the Word, and he exercised a very gracious ministry in Shropshire, Liverpool, Woodley, and Stockport.

None who heard William Pugh preach on New Testament incidents can ever forget the impressive and vivid way in which he made the truth contained therein to live before them. His face would shine with spiritual radiance as he prayed or sang such hymns as “And can it be.” He was greatly successful as a class leader and teacher of young men.

Rev. R. Crewdson conducted a memorial service on Sunday evening, December 11th. Much sympathy is felt for the family, and especially for Mrs. Pugh, who is, indeed, a “mother in Israel.”

He married Diana Thomas (abt1839-1922)  in the spring of 1870 at Liverpool, Lancashire. Census returns identify six children.