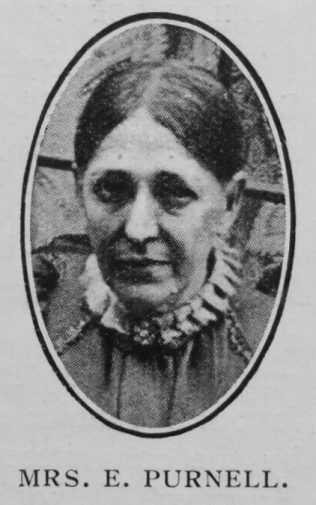 Transcription of obituary published in the Primitive Methodist Magazine by E.P.

From her earliest days Elizabeth Purnell attended our Bell Street, Tipton, Sunday School, and often accompanied her mother to the class meetings and other Church services. An increasing love grew upon her for the House of God and her home was ever open to His servants.

Tenderest sympathy with the poor and oppressed charged her life with the spirit of Christlikeness. To our Bell Street Church she has given her sons, who in the musical world have attained a very high degree. In her home she was the angel of light. Loving her Bible as she did, she would read portions of Scripture with her loved ones, and when visiting some of her close friends she would seek the joy of association in prayer.

Sixteen years ago she lost her husband, and for many years she suffered affliction patiently which in later days oft prevented her attending the house of prayer. Ten long weeks she was confined to a sick chamber, her sufferings being most acute. At the age of seventy-one years, on October 20th, 1911, she entered into rest.

Elizabeth was born abt1840 at Tipton, Staffordshire, to parents John, a miner, and Elizabeth.