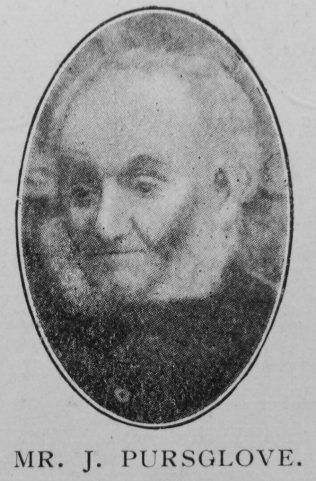 Mr. John Pursglove, of Middleton, died in peace June 19th, 1909, in his eighty-ninth year, and was interred at Youlgrave, June 21st. This photo was taken in his eighty-seventh year. Converted early in life, our brother became a member of our cause at Middleton and. remained one until his removal from earth to heaven. He has been missed very much in the home, chapel, village, and neighbourhood; “Being dead, yet speaketh.”

He knew Hugh Bourne, had heard him preach, and delighted to talk about him and other worthies. He was punctual at the means of grace, and loved the house of God. Being a good singer he started the tunes for a long time. A liberal giver to the cause of Christ, kind to the poor and afflicted, he believed in loving his neighbour as himself. The preachers always found a home with him.

He left four sons, and one daughter; one of the brothers is the Society steward. He and his brother Henry provide a home for the preachers now.

John was born on 9 February 1821 at Middleton by Youlgreave, Derbyshire, to parents Henry Pursglove and Martha Smedley. He was baptised on 22 July 1821 at Bakewell Wesleyan Chapel.

He married Sarah Marsden (abt1827-1899) in the summer of 1856 in the Bakewell Registration District, Derbyshire. Census returns identify five children.

John died on 19 June 1909 at Middleton by Youlgreave, Derbyshire.