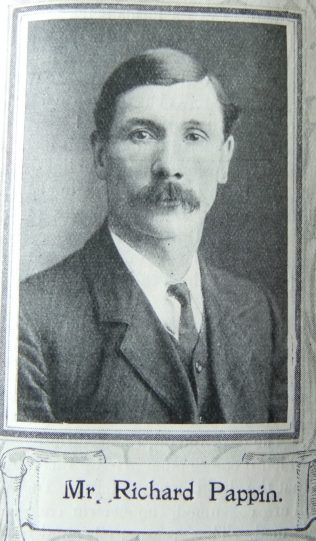 Mr. Richard Pappin, of Oak House, Redruth, is one of the younger senior chancellors of our Church. Born in 1869 he is not yet forty years of age, but he has had a wider experience than many men ever have. Like so many Cornishmen he has spent several years abroad – mostly in Johannesburg – but never forgot his church at home. During a revival at Redruth in 1891 Mr. Pappin gave his heart to God, though all his life he had been closely associated with our Church. He is a great believer in the class meeting and rarely absents himself from it.

He is a trustee and chapel steward at Redruth, and a teacher in the Sunday School. He has only recently (September 1908), been elected to the senior Chancellorship of his circuit, but unerring insight made the choice, and already he is proving himself to be a worthy successor to previous holders of the office.

Richard was born in 1869 at Redruth, Cornwall, to parents William and Sarah. William was an iron moulder.