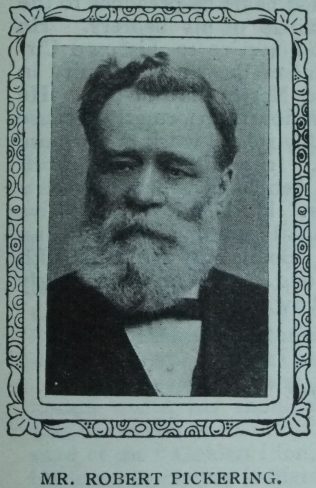 Mr. Robert Pickering, of Sunderland II. Station, belongs to a class of men who constitute the backbone of our Church. He is a man of unswerving fidelity whose escutcheon has never been smirched. From our Sunday school at Winlaton he passed, at the age of seventeen, into the church, and from then till now – a period of fifty-five years – he has served our Zion with unstinted devotion. This year he reaches his jubilee as a preacher, having been put on the plan by the Sunderland Circuit in 1857. In his earlier years the station was very large, containing upwards of thirty places, and often our friend had to walk twenty or twenty-five miles in fulfilling his appointments. Possessing abilities above the average and putting heart and conscience into the preparation of his sermons, he was frequently requested to preach for other denominations, in addition to taking a full share of services at home. Today Sunderland II. has become practically a pastorate, but as class leader and Sunday school teacher Brother Pickering is still serving the Church he loves.

He has filled, in turn, every available office in the Church, and for many years has been a member of the various district committees. On a number of occasions he has represented his Circuit in the District Meeting, and at Cullercoats he was elected to the vice-presidency. He has also been a representative of his district in the Conference. Though just over seventy our brother is in vigorous health and in spirit claims to be as youthful as ever. May he long abide with us!

Robert was born abt 1836 at Winlaton, Co Durham, to parents Robert and Elizabeth. Robert, senior, was a husbandman (1841).

Robert worked as a tailor and draper.